New Auction World Record for a Stamp of India 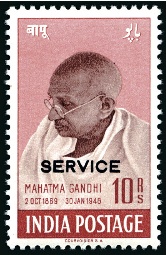 On May 19th, 2011 David Feldman sold a 1948 10 Rupee Mahatma Gandhi stamp of India for a World Record price of EUR 144,000 (US$ 205,000); this is the highest price ever paid for a single Indian stamp (smashing the previous 2010 record set by the 4 Annas “Inverted Head” error). Additionally it is also believed that this sale possibly represents a World Record price paid for a modern issued stamp from any country.

The stamp, probably the finest remaining example out of only 18 known in existence today, was issued by the Government of India as a set of 4 commemorative stamps on August 15th, 1948 as a tribute to the father of the nation Mahatma Gandhi, who was assassinated in January of the same year . These were the first commemorative stamps of Independent India, and issued in 4 denominations  – 1 ½ / 3 ½  / 12 Annas, and the 10 Rupees. A set of only 100 10 Rs. stamps (in two sheets) were overprinted with “Service”, making these the world’s least printed stamp.

In the same auction session, part of a fabulous Grand Prix winning collection of covers of Indian stamps used in Burma, attracted interest from all over the World. During a tense period of bidding, the collection was sold for a total amount of EUR 672,000 (US$ 957,000).