Romania – The Prince Carol I issues 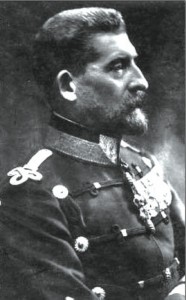 King Carol I of Romania

Karl Eitel Friedrich Zephyrinus Ludwig von Hohenzollern-Sigmaringen was born a German prince in 1839, of a family closely related to the Prussian throne. As a second son, his early career was in the Prussian military, serving with distinction in the 2nd Schleswig War against Denmark. His family was on good terms with Napoleon III, thus when Prince Cuza was deposed, Napoleon recommended Prince Karl to the Romanians searching for a new elected ruler. Travelling incognito, Karl arrived on Romanian soil in May 1866, and was greeted in Bucharest by a huge crowd eager to see its new ruler.

On June 29, 1866, the Romanian parliament adopted a new constitution which ignored the country’s dependence on the Turkish Empire and made Karl, now “Carol I,” the hereditary ruler. He would rule for 48 years, the longest rule any Romanian principality has ever known, and helped Romania gain full independence. He fought in the Russo-Turkish War of 1877-78, and became King in 1881. After his sudden death in 1914, his nephew Ferdinand (father of the later philatelist-king Carol II) became King.

The early stamps of his reign, those of the “classic” period, were lithographed portraits, facing left, in a succession of frames. The issues of 1866 through 1870 show Carol I beardless with large “sideburns,” while those of 1871-72 have beards. The introduction of perforations in 1872 for three values of the last design marks the end of the classic era in Romanian philately. Both plating and the wealth of postmarks and the richness of the postal history of the period makes these issues a perennial source of interest, particularly covers to foreign destinations, mixed issue and mixed country frankings, and registered and insured mail.

Lithographed by S. Sander & Co. of Bucharest in black on coloured wove papers, thin and thick, without watermarks. Stones of 200 composed from transfer blocks of 6 types, in 12 horizontal rows of 17 subjects, the top right corner having four blank spaces arranged as a block. The 20 Parale value comes in two different designs: type I has the the right Greek “meander” beginning under “2” of “20” while type II has the same beginning under the “0” instead. Four of type I and two of type II made up the transfer block, which included one type II with a colourless dot in the top of the right meander (transfer type 5) used only for printing stone “A” per Heimbüchler II (p. 184). 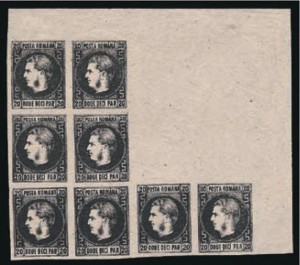 As with the previous Cuza issue, the stamps are relatively common as singles, with mint multiples, particularly those showing variations of transfer types, being highly prized, and with covers, particularly of the 5 Parale, being scarce to rare.

The thick paper stamps were issued on August 8, 1866 and the thin papers during the following month. The issue was demonetised on December 31, 1867 with the currency conversion to the decimal system of Lei and Bani (1 Leu = 100 Bani) instead of Lei and Parale (1 Leu = 40 Parale).

With the change of currency from Parale to Bani on January 1, 1868, a new issue of stamps was prepared with denominations appropriate to the revised rates: 2 Bani for printed matter, 4 Bani for local letters, 18 Bani for domestic mail, registration fee or advice of delivery. Stamps in these values were issued on February 1, 1868 and a supplementary value of 3 Bani in the same design followed in May 1870 (the printed matter rate was raised to 3 Bani on October 15, 1870 and the local letter rate raised to 5 Bani, while the domestic letter rate was reduced to 10 Bani).

The stamps were lithographed by S. Sander & Co. in stones of 100 stamps, composed from transfer blocks of 8 types, in 7 horizontal rows of either 14 or 15 subjects, with 5 blank spaces, in horizontal or vertical strips. The sheet layouts (as far as known) are given by the Romania Catalogue CMPR ‘74 and are referenced by Heimbüchler in his Handbook II (p. 347).

Several generations of collectors, including Sir John Wilson, have specialised in the plating of the Romania lithographs, though a paucity of large multiples and the use of different printing stones for several values make multiples larger than a pair highly prized. Further, the diverse possibilities of usage, including multi-colour frankings, mixed frankings with subsequent issues and uses to foreign countries make this issue highly important in telling the story of the expansion and development of Romania’s postal communications.

Reflecting the new rates introduced in 1869 to Austria-Hungary and to the German Confederation, these stamps, often called the “International” issue, were issued on April 1, 1869 and remained in use as late as September 1872 (they were demonetised on October 12, 1872). 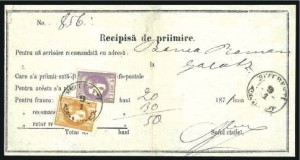 Lithographed by Sander & Co. in sheets of 100 (7 rows of 15 with blank strips of 5 at various edges of different stones) composed using horizontal strips of four transfer types (the 50 bani bi-colour had 8 transfer types for the stone of the head). The 15 bani is known on laid paper, presumably from one sheet, a trial print. The issue includes two bi-colours, and one value (10 bani) printed in three distinct shades: shades: ultramarine, blue and indigo. Heimbüchler states (p. 221), “Unused multiples larger than a block of four from this issue are rare. Original sheets are unknown.” 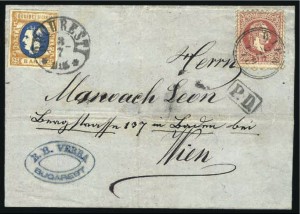 Mixed franking with Austria – a key showpiece for the period

Multicolour and mixed issue frankings, a wealth of available cancels, and letters to various foreign destinations make the postal history of this issue a rewarding challenge.

A new design by S. Sander, lithographed by Socec & Co. of Bucharest in sheets of 100 laid out using vertical transfer blocks of 10 (2 x 5) to produce sheets with 7 rows of 15 including 5 blank spaces vertically at right (see sheet layouts, Heimbüchler pp. 347-8). Only the 10 Bani yellow is known on laid paper.

Three values (5 bani Red, 10 bani Yellow, 25 bani Brown) were issued on January 13, 1871 and the 10 Bani blue was issued in December 1871. The final value, 15 Bani red, appeared January 20, 1872. Finally, in August 1872, a new provisional imperforate printing was made of the 10 bani from a new die (with the head located further to the right) in both ultramarine and in prussian/greenish blue, and of a new 50 bani Bi-colour with beard. This last is extremely rare as a single franking on cover. The latest known uses of the imperforates are from October 1872. 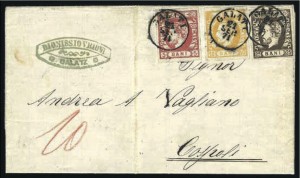 Three values (5 Bani red, 10 Bani blue, 25 Bani brown) were issued line perforated 12 ½ on February 27, 1872 using stones of 100 plus 5 blank spaces, similar or identical with those for their imperforate counterparts. The vermilion shade of the 5 Bani and the violetultramarine shade of the 10 Bani are far scarcer than the “normal” colours. As the perforating machine had been thoroughly used well before its application to this issue, rough, defective or missing perforations, and poor centering, are the rule rather than the exception.

Mixed issue frankings, foreign destinations, multicolour frankings and even bisects can be found for these stamps. The bisects are known in small numbers for the 1868-71 issues. As noted by Heimbüchler, “…there are fewer bisects on complete documents than covers of the first Moldavian issue” (of which he recorded a total of little more than 100); his record (II, pp. 298-9) shows just 58 known to him, most on postal forms from Bolgrad. 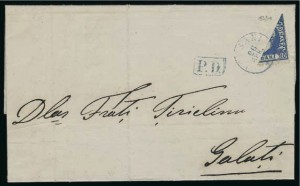 Bisect cover (one of two known, other than on postal formulars)

With the appearance in 1872 of the Paris (France) prints of a new design, similar to that of the first issues of France and Greece, the charming if primitive classic period of Romania came to an end.

This article is drawn from our auction catalogue for the “Tomasini” Romania collection, held in December 2006. Copyright 2006 by David Feldman SA. Our sincere thanks to Mr. Fritz Heimbuchler for his assistance in reviewing that auction and allowing us to quote from his Handbooks.