The Burrus cover from the Karpov Collection 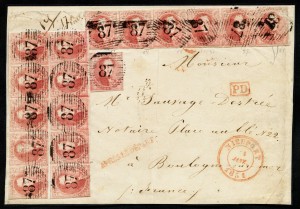 How can you find the missing 40c stamp ?

This item is a cover front with a massive franking of 17 examples – a strip of 6, two strips of 5 and a single stamp – of the imperforate 40c Medaillon posted from Nieuport in 1851 and bearing the numeral cancel “87” on all the stamps.

Apparently Nieuport was not issued and did not have 40c stamps available so the sender must have had these stamps with him from a previous origin. However at the Burrus auction in 1963 (lot 82) the single stamp was missing from the cover. When the item came for auction again in 2000, a certain Mr. P, collector from France, had been studying the auction catalogue and found in his pages of used Medaillon stamps, a 40c single with the exact same “87” cancel! He became very excited believing that it might be the missing stamp and went to Brussels to attend the auction. Before doing so he examined the item carefully and discreetly placed his stamp in the missing spot : eureka !  It matched perfectly. Of course the coincidence was amazing since there is probably no other 40c stamp with this cancel than those on this cover! Mr P attended the auction and with great enthusiasm bid for the marvelous item not disclosing to any of his competitors about his discovery!

Sadly, the competition was great and he was outbid in the sale by Mr. Karpov. But as you see the story did not conclude there. In semi-dismay and disappointment yet not wishing to have his discovery be lost to the philatelic world, he contacted Mr. Karpov and the result is the cover as you see it here today !

To our knowledge, this is the most important usage of the 40c.