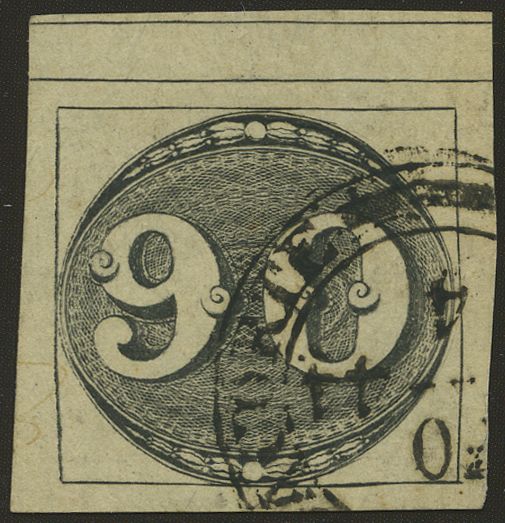 This is the third extract in a series of articles about philatelic rarities taken from the Encyclopaedia of Rare and Famous Stamps, vol.1, pp.11-12, by L. N. Williams, published by David Feldman in 1992, with updates since its publication.

The first issue of Brazil – the Bull’s Eyes, so nicknamed from the design’s resemblance – comes fourth chronologically in order of issue of adhesive postage stamps. First, in 1840, came the Penny Black and Twopence Blue of Great Britain; in 1842 came the New York Dispatch; and, in March 1843, came the Fours and Sixes of Zurich. The Bull’s Eyes first appeared on 1 August 1843.

Students of such renown as Lieut. Col. G.S.F. Napier, whose book, Stamps of the First Issue of Brazil, London 1923, is a classic work, and C. Schill who had worked with him, studied the stamps themselves to reconstitute the sheets and discover the plate varieties – an area which still offers room for research. The details of their production remained hidden until 1938, when Dr. Jose Kloke, in his Bull’s Eyes, laid to rest (but it was stated again as recently as November 1986 in Sammlerdienst vol 37 no 11 p 85) the long-held, fallacious belief that Perkins, Bacon & Petch, printers of the Penny Black and many other classic British Empire issues were the firm who produced the original Bull’s Eyes dies and also printed the stamps. Dr. Kloke’s book was translated by L. I. G. Leveson, FRPSL (he claimed no more than that it was “done into English” by him) in a rare item of philatelic literature comprising 44 foolscap pages of single-spaced typewritten characters. The story is a tribute to the relentless persistence of philatelic research workers determined to uncover long-buried facts and a recognition of the co-operation of officials without whose help such a task would be impossible. It reads like a philatelic detective story, with clues transpiring one at a time over some 20 years, which has clarified a long-respected statement published in March 1867 by Jean-Baptiste Moens, the pioneer Belgian dealer, in his journal Le Timbre-Poste vol 5 p 22. Moens is still the authority that the Bull’s Eyes were engraved by Srs. Carlos Custodio de Azevedo and Quintino José de Faria, engravers to the Mint, and were printed on a machine press by Srs. Clementino Geraldo de Gonviea and Florentine Rodrigues Prado at the workshops of the National Treasury. 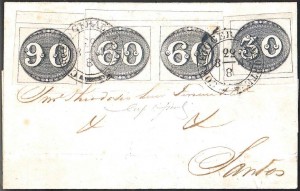 The Meyer cover, the only known cover bearing the complete first issue

In conception, however, the Bull’s Eyes are entitled to rank second only to the British issue.

It was on 30 November 1841 that the Brazilian Government was authorized by Law No. 43 to create stamps. That law came about through the efforts of J.D. Sturtz, a German who had been a Brazilian consul to Prussia. Enlisting the aid of a British charge d’affaires in Brazil, he urged the adoption of prepayment by means of stamps, following the innovation in Britain.

Eventually emerging from carefully preserved, if musty, official records was the prime fact that, in 1841, the Brazilian customs authorities seized an engraving machine from one Pedro Ludwig, confiscated it and used it in the service of the Mint. On Christmas Eve 1842 a transferring machine and accessories were bought by the Mint from one Eduardo Lemerick.

Production of the plates involved engraving a flat die with figures and background – a different die for each value; 30, 60 and 90 reis – picking up the design on a roller by rocking it in the transferring machine in close contact and under heavy pressure with the flat die, and then using the roller in the transferring machine to lay down the designs as many times as required on a printing plate.

Copper plates were used, and little more than two months were spent in engraving the dies and preparing the first plate. It contained fifty-four stamps, consisting of three panes of eighteen stamps of each value. That plate was finished on 29 April 1843. On 9 May, the President of the Treasury ordered the stamps to be printed from the workshop of the Apolices Press, which adjoined the Mint. By 29 May a second plate of fifty-four of the three values was ready; a third plate, containing fifty-four stamps of 30 reis in three panels of 18 was ready on17 June but it was used rarely. On 27 June, sixty of the 30 reis appeared on a completed fourth plate. Two more plates of sixty of the 60 reis stamps were ready respectively on 11 and 20 July.

A notice ordering use of the stamps in Cortes on 1 August 1843 was published on 5 July. “Cortes” was the designation by the postal staff for the Rio de Janeiro office since it was the general post office of the imperial court. A 60 reis on fragment at one time held by David Feldman showed clearly a postmark of 1 August 1843 reading GERALDACORTE; cancellations in later years read GERAL DE CORTE.

Of the finds of Bull’s Eyes the most important has been a vertical strip of three; the upper two stamps are the 30 reis value and the lowest is a 60 reis, with a dividing line which separated the different values on the plate. Formerly in the collection of Charles Lathrop Pack, the strip is known as the”Pack Strip”. In March 1963 at auction by Stanley Gibbons the Pack Strip realised £8,250. Auctioned again by Stanley Gibbons in February 1969, the Pack Strip realised £11,500. It was sold in the Robert Siegel auction at Ameripex ’86 on 25 May for $275,000. [In April 1993, David Feldman sold the strip for CHF 1’150’00 plus commission as part of the Angelo Lima collection, and was most recently sold by Siegel as part of the Islander collection for $1’900’000 plus 15% commission.] Another, but defective multiple of different values setenant is known.

A complete used pane of eighteen of the 90 reis was found in Brazil about 1898. A complete unused pane of eighteen of the 90 reis was sold by Siegel in the Islander collection for $260’000. Among other finds, the most noteworthy is a unique complete sheet of sixty of the 60 reis from the plate which was ready on 11 July 1843. At Stanley Gibbons’ auction in Frankfurt on 18 May 1978, the sheet realised DM173,000 ($82,381). A 30 reis interpane block of four realized SF253,000 ($168,000) (£97,308) at the Habsburg-Feldman auction in Zurich 18 November 1989 of the Amazon Collection which had been assembled over half a century. Colonel Napier had theorised correctly about the existence of the third plate which was proven by the later discovery of this block. The collection had earned the Grand Prix of the Court of Honour at London 1980.