This is the second extract in a series of articles about philatelic rarities taken from the Encyclopaedia of Rare and Famous Stamps, vol.2, pp.2-10, published by David Feldman in 1996. It details the known history of every Perot First Issue stamp that is known to exist. It has been updated since the book’s publication with the most recent auction results known to us.

Printed in red on bluish wove paper, dated 1854. The stamp is cut into a rough octagon; none of the design is infringed. Two ink smears cover parts of the letters “W.B.” in the signature (which have been “lightened” or removed), pass between the B and E of BERMUDA and cover the R in that word. The stamp is stuck on the back of an entire lettersheet, addressed to “B. Wilson Higgs, Esqr., St. George’s”. The letter is dated in April 1855.

18(??): Found by Louis Mowbray, a St. George’s resident, among his grandmother’s effects.

1897: They returned the letter to Bermuda.

1973 (Apr): The Tomasini collection was bought by Stanley Gibbons Ltd.

1991: Certified by the British Philatelic Association 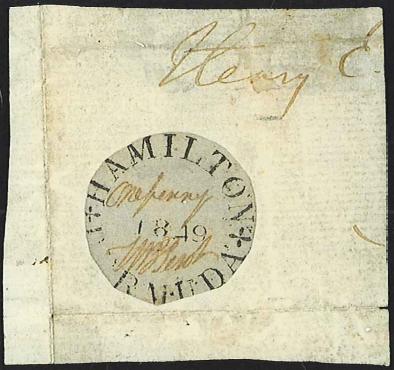 Printed in black on bluish-grey paper, dated 1849. The stamp, which is defective and has been extensively repaired, is cut round, but irregularly cut, so that the tops of the letters HAM are infringed, and the bottoms of the letters of BERMUDA are missing. The stamp is ised on the front of a piece of the original letter which is addressed to “Henry E” [Higgs, St. George’s]

1849: Henry E. Higgs received the stamp on a letter.
1898: Found in Bermuda by an Englishman while going through some papers in the office where he was working.

1929: Sold by David Field fir £550 to a collector who preserved his anonymity.

Printed in black on bluish-grey paper, dated 1849. The stamp is cut round, but irregularly cut, so that the top of the N and the foot of the D are infringed.

Printed in red on thick blue wove paper, dated 1856 (the only example). The stamp is cut square, but badly cut, so that the tops of the letters TON are missing, it has a small thin and a few faint bends.

19(18?): Numbers IV, V, VI, VII and VII were found in Bermuda among some old business correspondence belonging to a retired merchant whose business was at St. George, by Miss Frances Trott

1922: Number IV, together with numbers V, VI and VII were offered on behalf of Miss Trott by her nephew, Dr. William E. Tucker for £50 each to Richard Roberts who bought the four stamps

1937: Tom Allen bought it again on behalf of King Carol of Rumania 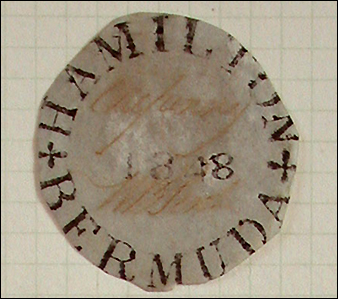 Printed in black on blusih-grey paper, dated 1848. The stamp is cut rounfm but irregularly cut, so that parts of all letters are missing. 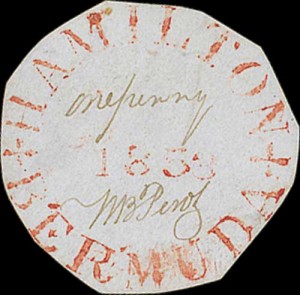 Printed in red on white paper, dated 1853. The stamp is cut round, but irregularly cut, so that the top of the left vertical stroke of the H and the foot of the E are cut into. Although the margin at some other points is negligible, no other letter is infringed. 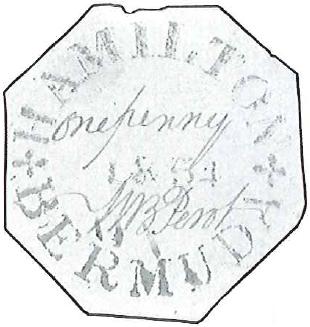 Printed in red on bluish wove paper, dated 1854. The design is doubly struck; this is particularly visible in the letters AMILTO. The stamp is cut in a rough octagon; none of the lettering has been affected by the cutting but there is a small piece missing from the top margin and the top of the T is infringed. 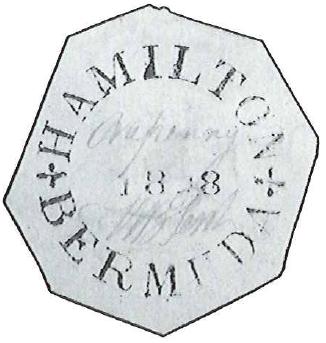 Printed in black on bluish-grey paper, dated 1848, the stamp is cut into a rough octagon. This is a slight thin.

1921: Given by Miss Trott to her nephew, Englesbee Seon. 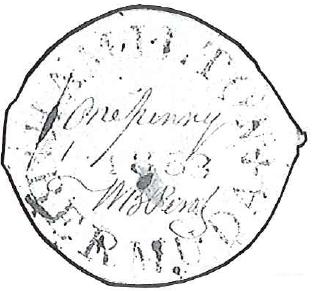 Printed in red on thick white paper, dated 1853. The stamp is cut round, but none of the letters are infringed. There are several ink-stains on the face: one stain runs across HA; there is another in the diagonal stroke of N, a third beneath the 18 and covering the top of B in the signature, yet another beneath BE, and others in R, M and between UD. There is slight thinning to the right of the right-hand cross between HAMILTON and BERMUDA, but the thinning does not extend to the design. The stamp has part of its original gum. Numbers IX and X once formed a horizontal pair but they were very lightly joined and were separated in 1934.

1853: Together with no. X, was bought from W. B. Perot by John Harvey Darrell, Chief Justice of Bermuda.

? date: Together with Darrell’s papers, passed to his grandson, Captain M. D. James.

193(?): Passed into the Royal Collection 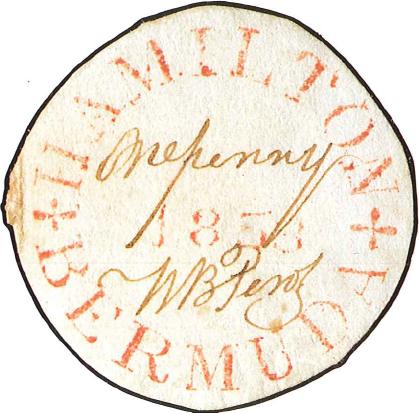 Printed in red on thick paper, dated 1853. THe stamp is cut round, but none of the letters are infringed. THere is a slight thinning on the left of the left-hand cross between HAMILTON and BERMUDA, but the thinning does not extend to the design. Numbers IX and X once formed a horizontal pair, but they were very lightly joined and were separated in 1934. 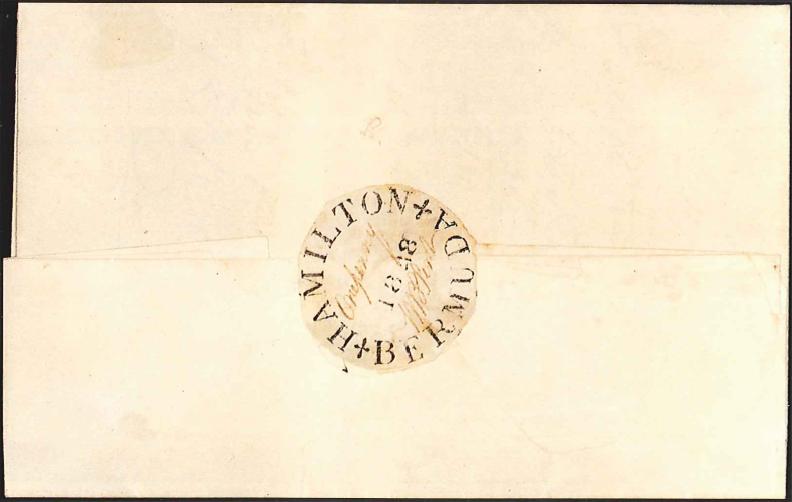 Printed in black on bluish-grey paper, dated 1848. (The following description is taken from the Harmers 1989 auction catalogue: “With margins clear of all letters all round, used on reverse of letter to Henry E. Higgs at St. Georfes, from N. J. Butterfield (once Mayor of Hamilton) at Hamilton, dated March 28 1848, the letter contains interesting comments about a leaking ship and the crew’s unwillingness to sail in her. The stamp with a few faint age stains was additionally used as a seal and was damaged when the letter was opened. The stamp has subsequently been skillfully restored and is of fine appearance.”

1848: The letter was received by Henry E. Higgs

192(?): B. V. S. Smith acquired the letter with some correspondence of the Higgs family