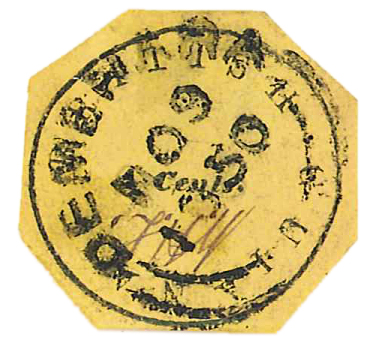 John E. du Pont earned fame and notoriety for his position as a beneficiary of the Du Pont chemical company fortune and regrettably later in his life, for responsibility of the death of Olympic gold medal wrestler Dave Schultz in 1996, for which he was convicted and spent the last years of his life in prison. However, little is known about his fame and honours as a stamp collector!

John du Pont always had an interest in stamps and stamp collecting and formed several fine collections including those of Canada and its pre-dominion provinces such as New Brunswick, Nova Scotia and Newfoundland, as well as Samoa, Falkland Islands and some Eastern European areas.

However, his greatest philatelic accomplishment was the building of a great collection of the old British Colony known as British Guiana; du Pont achieved no less than 5 Grand Prix Awards including a National, International and Grand Prix d’Honneur at various international philatelic exhibitions which ranked him third in the all-time list of multiple Grand Prix winners in 2000.

However, his most coveted and treasured win was that Grand Prix for the British Guiana at the Ameripex International Exhibition in Chicago, 1986. Here he showed, along with the collection, the famous ONE CENT stamp of 1856 often credited as the most valuable stamp in the world – indeed du Pont had bought this stamp for a then world record price of $935,000 in 1980.

Since his death in December 2010 many rumours hinted to the sale of the Collection and the famous One Cent stamp; these rumours are now confirmed by recent announcements by Sotheby’s where it is thought that their offer of the One Cent on June 17 in New York, may well break down the barriers of the philatelic market and attract a buyer outside the philatelic world.

Today, the well-known stamp auction company of David Feldman announced that it has been selected to offer du Pont’s Grand Prix Collection of British Guiana including over 200 individual items including great single rarities with mint, used and original covers, at its own auction ten days later in Geneva, Switzerland.

The collection will be offered on June 27 in Geneva, Switzerland.

About David Feldman
David Feldman is one of the world’s leading philatelic auction houses and currently holds the records for having sold the most expensive single stamp (The Treskilling Yellow of Sweden for CHF 2,875,000 in 1996) and the most expensive philatelic item (The Mauritius Bordeaux Cover sold at CHF 6,123,500 in 1993), and numerous other records. It has offices in Geneva, Hong Kong and New York City.
For more information, please contact  +41 22 727 07 77, or via e-mail at [email protected]