Well history was made last night in New York and I was blessed to be present. As I arrived a little before 18.00, there were a dozen European dealers and auctioneers arriving at the same time. We all gathered in the entrance to Sotheby’s about a hundred or so and waited to be ushered to the 7th floor where there was a champagne cocktail awaiting us.

The auction room was amazing, enlarged images posted everywhere and a beautiful display of the stamp. As the auction approached the room filled up. There was a bank of press cameras, perhaps seven or eight with Japanese & Chinese press crews among them. I guess there were about 250 seated and another 150 standing. With more the six or seven people ready to take phone bids.

I sat beside Irwin Weinberg the previous own and the man who sold the stamp original to John Dupont, we had a long chat about his involvement, and the excitement he was feeling being present at this event. 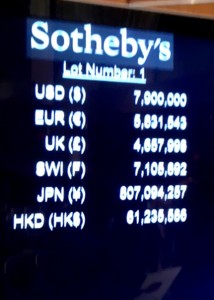 So to the auction. David Redden opened the lot with a rather long speech reading the conditions of the sale & then the basic description of the stamp. After which he opened the bidding up at 4.5 million, with room bidding only he took it to 7.6 million. At 7.6 million the phone jumped in and bid 7.7, room 7.8 and finally 7.9 to the phone bidder. Hence the final price was $9.48m including the 20% buyer’s premium.

After the auction David Redden confirmed that the buyer wanted to remain unknown, and the stamp would be exhibited at the Smithsonian and at the 2016 New York show.

For all those interested in these primitive and early stamps of British Guiana there is more to come with the sale of the rest of the John E. du Pont collection coming up at our auction in Geneva next week on June 27th.