The Mauritius 1859 Sherwin issue is a most challenging and exciting stamp issue to study and collect, perhaps even on a par with the famous “Post Office” Issue because of its rarity; but very little is really known about it and maybe that’s why! There are so many fascinations about the issue. For example, it replaced the Lapirot stamps after only seven months. In fact we must also wonder why Sherwin got involved at all, since he was neither an experienced engraver nor printer. This issue was also poor received and short-lived just like its predecessor. But there is not much evidence and till today we still rely on educated guesswork. If there is any reader of this article who may have some useful information, please do let us know!

It is likely that the Lapirot plate had become so worn that the printed stamps became just too rough and unacceptable. Not much imagination was applied for Sherwin’s issue; the setting and style used the original 1848 Post Paid plates from the Barnard issue but the re-designed head lacks the elegance and grace of the original portrait. 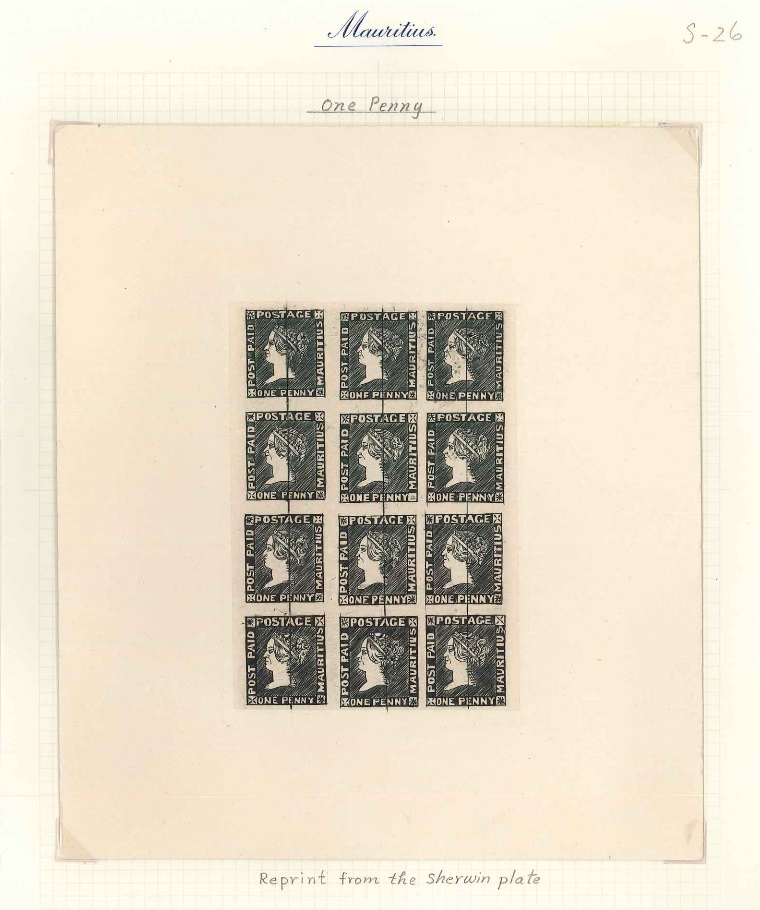 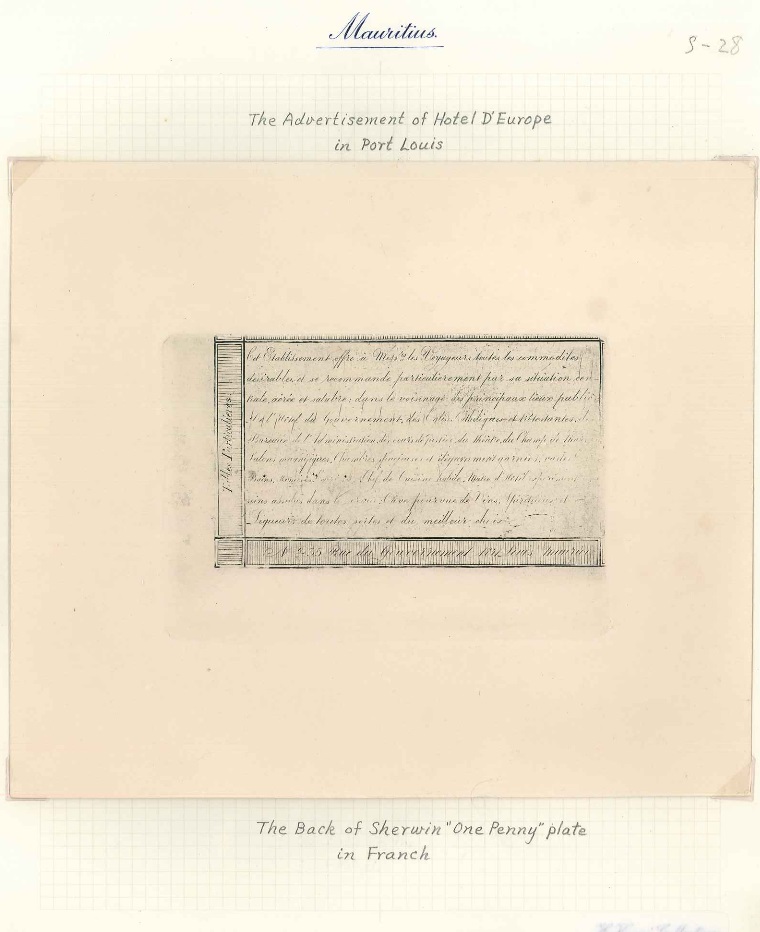 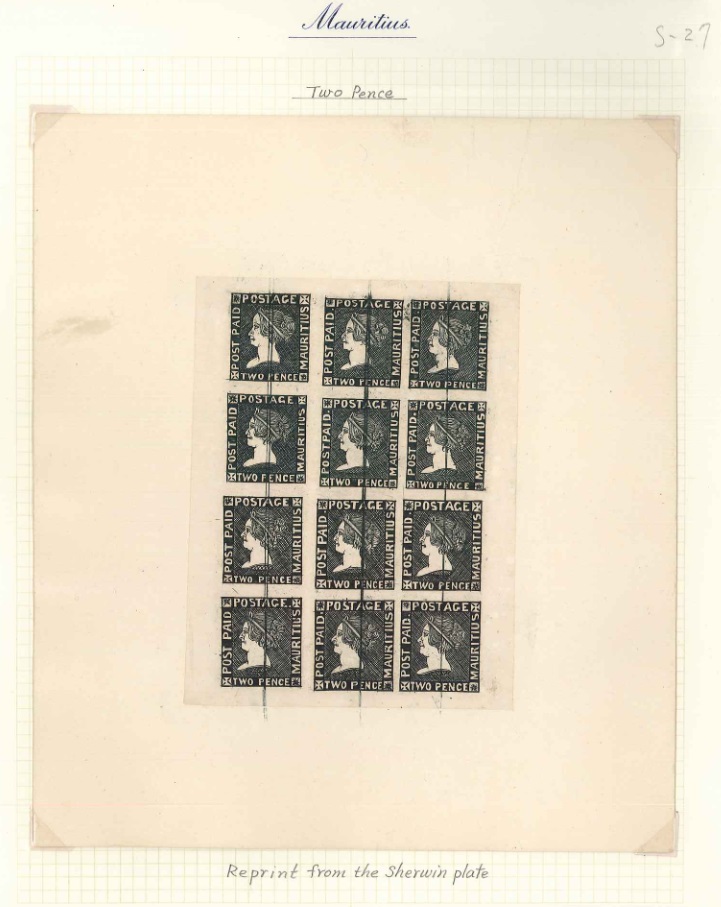 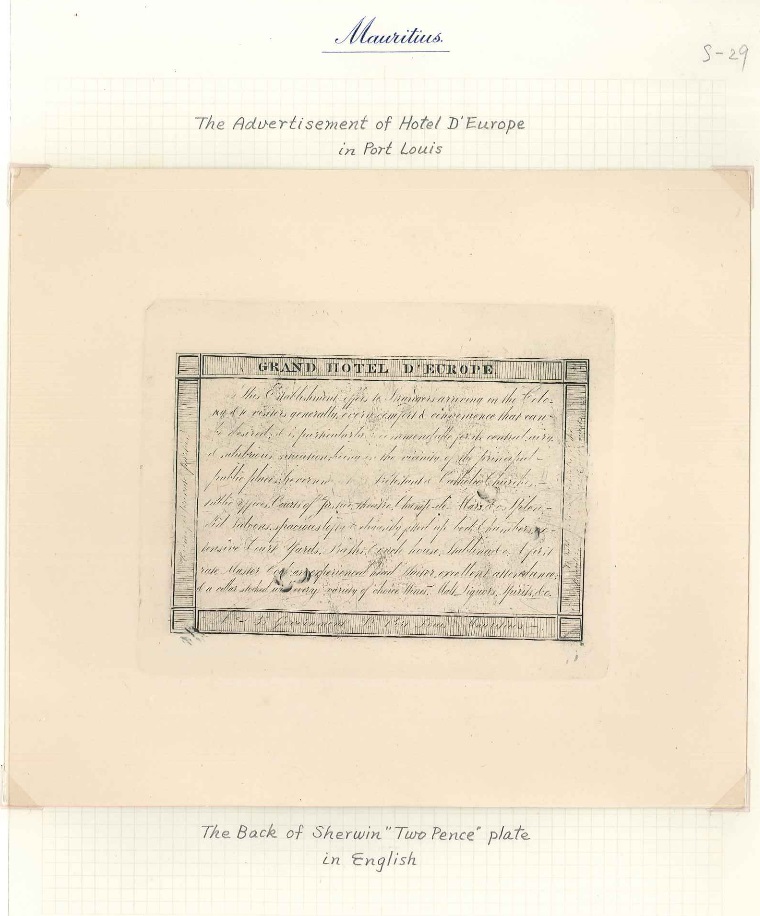 Fig. 1: Set of reprints from the original Sherwin plates (after being defaced) including the unissued 1d, showing the back of both plates with Hotel D’Europe advertisements (this set is ex Kanai)

The stamps were printed like Barnard’s settings in sheets of 4 x 3, but what remains a mystery is the reverse of the plate which shows an advertisement in French for the Hotel d’Europe in St. Louis. There is no record of any connection between such a plate and Barnard’s use for the “Post Paid” issues already beginning eleven years earlier.

Robert Sherwin was the keeper of the Prison at Port Louis, and also a master at the Royal College there. As can be seen in fig.1, he in fact produced plates for a One Penny value that was never used, as well as the Twopence. An educated guess may be that he proposed a temporary solution based on the original “Post Paid” plates just to cover a short period while a new issue with new designs of both 1d and 2d were awaited from Louis Dardenne. Demand for the 2d value for was potentially higher, perhaps as it was needed for mail abroad, and as can be seen by covers with multiples of the “Post Paid” 1d sent even after the issue of the later Dardennes, this would infer there were still plenty of “Post Paid” One Pennies in stock and hence it was unnecessary to put the 1d Sherwin plate to press. The Sherwin Twopence was issued in mid-October 1859 and was indeed short-lived, as the new Dardenne issue appeared in December.

Barely two months usage can explain why the stamps of this issue are so scarce, in good quality so rare, and in unused condition so exceedingly rare. In fact the Sherwin Twopence unused is unquestionably one of the rarest and most valued general issued stamps in the entire world. With only TWO fine singles and a horizontal PAIR (prior to the pair being separated), it is comparable to the Post Office issue with only THREE of each of the 1d and 2d recorded.  There are two other unused recorded but defective.

Mr. “Tatiana”, enchanted by the Mauritius primitives, was deeply fascinated by the Sherwin issue and amassed, if we can truly say that given the small number of available stamps, the largest and most important group of Sherwins ever assembled by one collector – not just unused but also used and covers.

The unused section has to be the best ever, including the famous Kanai pair (since separated) and the marvellous example which graced the Ferrary, Hind, Lilly, Caspary and Kanai collections. After the Kanai auction in 1993, the pair was separated, since that astounding Ferrary example was the only known single stamp in fine condition in private hands. So now we had three fine examples and there are two defective ones. Mr. “Tatiana” acquired them all! 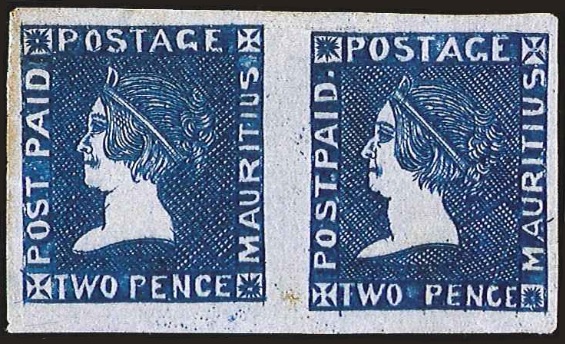 Image of the unused 1859 Sherwin pair taken from the catalogue of the 1993 auction of the Kanai collection of Mauritius, now split and offered as lots 20126 and 20127 in the June 30th-July 2nd auction series

When I split that great pair, for which I take full responsibility, it was in order to give at least three private collectors the chance to complete Mauritius unused with fine examples. One of the two fine singles is in the Royal Collection. However, I never dreamt that one collector would then buy the two separated stamps. His intention of course was to rejoin the pair in his fabulous collection. And so we have the unique and amazing opportunity to offer a new Mauritius enthusiast the chance to do the same – to purchase both singles which we offer in the upcoming June 30th-July 2nd auction (lots 20126 and 20127) and rejoin the pair and become the owner of this great gem of Mauritius philately. 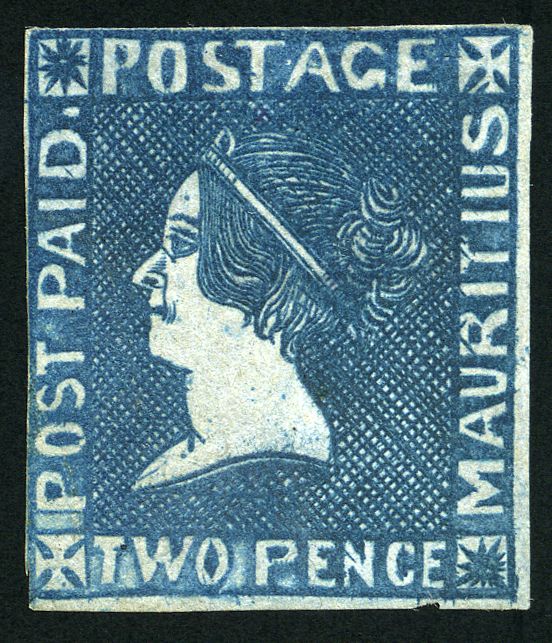 For the collector with a smaller budget, there is still a great chance to acquire an unused 1859 Sherwin with lot 20128 in our June 30th-July 2nd auction of the “Tatiana” collection (illustrated at left), which is one of the presumably only two other unused but defective singles known.