A number of queries arose following my last article regarding the printing details. Not everyone has access to the detail published in our catalogue for the celebrated November 1993 Kanai collection auction mostly still relevant today, and I feel therefore it can be worthwhile to reprint here:

Two Pence (a One Penny was prepared but never issued)

It is uncertain who actually engraved the copper plates but the available evidence suggests that it was commenced by Robert Sherwin and completed by another at Port Louis, Mauritius. It is not known who printed the stamps.

The ‘Post Paid’ plates became too worn for further use and were re-engraved for the ‘Sherwin’ issue. It was done so effectively that no feature of the ‘Post Paid’ engraving was afterwards discernible on the plates. The individual engraving almost exactly coincides with the position previously occupied by the ‘Post Paid’. Both the ‘Sherwin’ plates survive, although scored to prevent their further use, are in the Archives of the Royal Philatelic Society, London. Differences in the engraving enable every stamp to be identified as originating from one of the twelve positions on the plate.

Impression: Only one state of impression is recognized.

All Sherwin stamps are rare. In all forms I would guess less than 100, perhaps only about 80. We record the following :

Unused: 5 (including the separated pair) 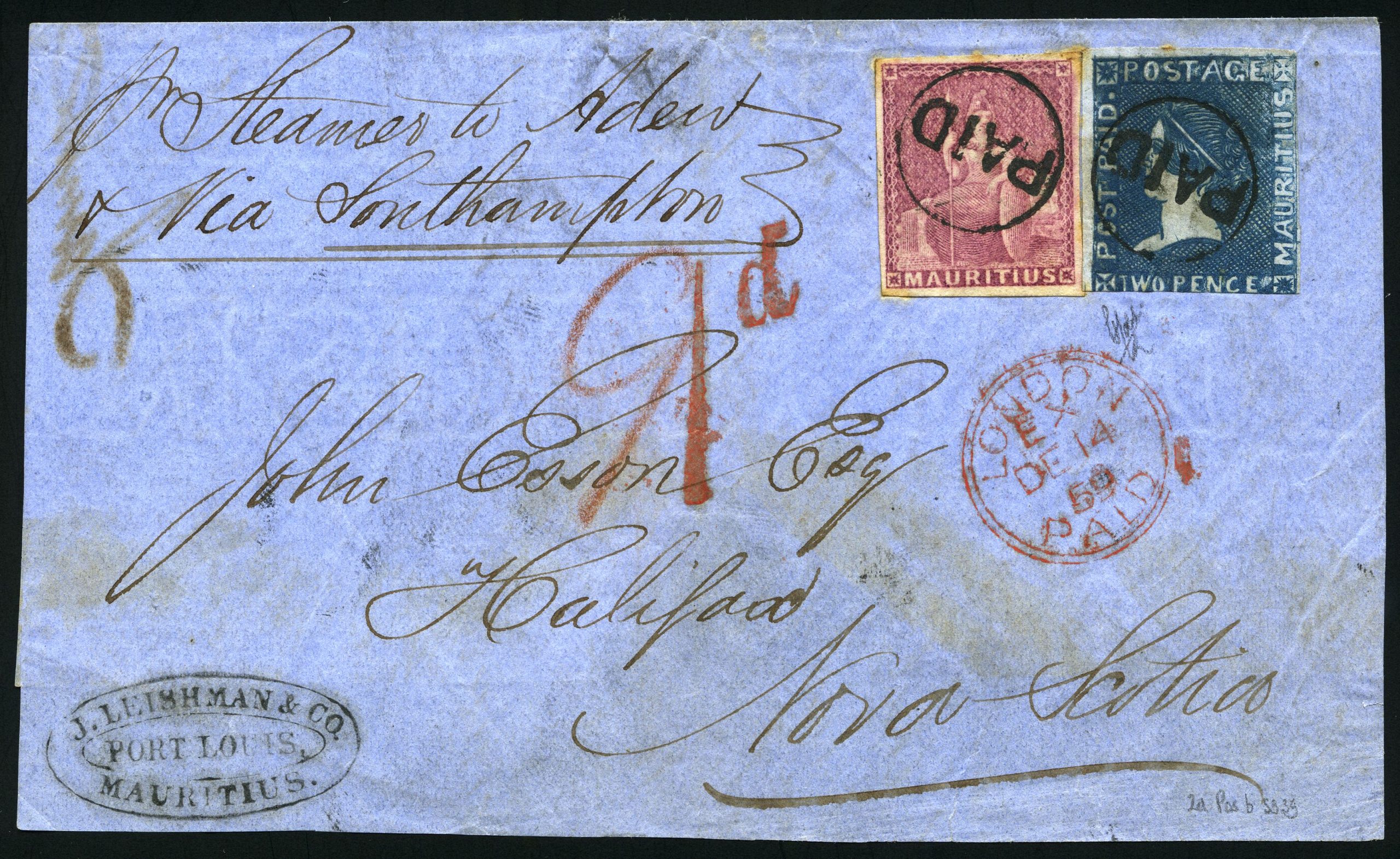 Of the seven recorded covers, most are pretty spectacular, comprising two with pairs plus two combination covers, one bearing another pair, and the other a delightfully coloured combination with the Britannia 9d dull magenta addressed to the extraordinary and unique destination of Nova Scotia. This cover is Lot 20136 in the coming Tatiana auction. 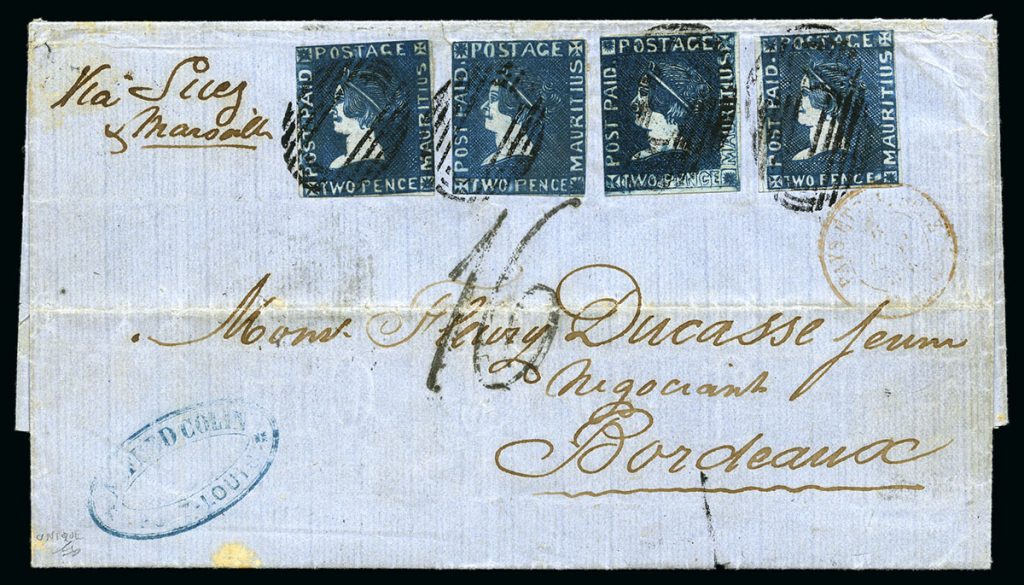 But the ‘pièce de résistance’ is undoubtedly the cover to Bordeaux with no less than FOUR Sherwins. This is a quadruple franking. In all primitive issue covers such a franking is itself extremely rare. It was the noticeable missing gem from the Kanai collection and, in my opinion, the most important Mauritius cover after the Post Office issue. 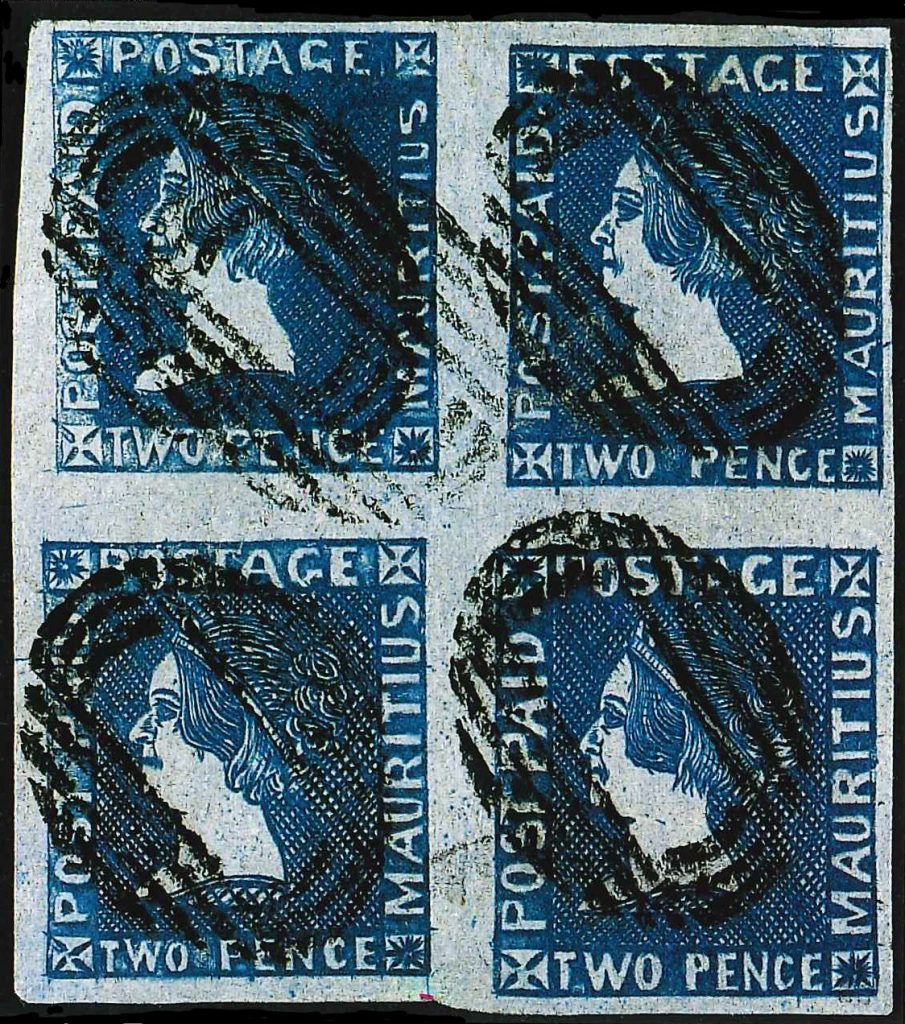 Imagine a used block of four! That could only exist from a likely quadruple rate also. It was Lot 206 in the Kanai auction sale when it fetched 86,250 Swiss Francs. Kanai also had three pairs, all surprisingly vertical when one would think the obvious cut would be horizontal. One of those pairs helped him make up a complete plate reconstruction which was a remarkable feat given the scarcity of the stamps.

Tatiana has one of those pairs, Lot 20129 in the coming auction. As Lot 207 in the Kanai auction it realized 16,000 Swiss Francs in 1993, stated to be one of the best pairs extant. The Tatiana offer this time also includes no less than 5 single examples. It’s the most abundant offer of Sherwins since the Kanai auction and likely the last time we shall ever see so many together.

From a study of existing examples we can see gradual defects in printing due to lack of inking. The defective inking is not regular affecting some positions much worse than others. It’s no wonder the issue the issue was withdrawn after such a short period.

There is likely much more to be discovered about this very elusive issue and I welcome any comments and especially any new discoveries of course. That brings to mind that one specialist had the kindness and care to point out that in my Part 1 of the Sherwins the “tête-de-chien” (Dog’s Head) was in fact the curse designated to the previous Lapirot issue, not Sherwins. As I’m self-quarantined right now I couldn’t check this out from the company library when I wrote the article.  My apologies, however on reflection, is the Sherwin issue any better – hardly a compliment to dear Victoria?

For those interested, here are some of the PDFs of the important collections and rarities of Mauritius sold by David Feldman in the last 30 years, which we hope will be a useful resource to Mauritius collectors (more will be added in due course):

2006, April: Mauritius in our Rarities of the World auction