Highlights of our Upcoming Auction Series

For this week’s digest we wanted to highlight some of the items and sections in our upcoming June 30th-July 2nd auction series that we haven’t touched on so far. In order to keep it interesting I thought I would highlight examples of different types of philatelic items that people collect and in the order which often they would display them in a collection; starting with pre-stamp, then going through essays, die proofs, colour trials, specimens, varieties and usages. For many people this is the driving force of their collecting; to tell the story of a country’s philatelic contribution through its postal history and the development of their stamps.

Lot 31897 is an 1860 cover from Montserrat with a very rare “PAID / AT / MONTSERRAT” crown circle handstamp. It is one of only 15 recorded and in fact one of only 11 used at this time before is was used again provisionally in the 1880s. It is one of stand-out items in the section of Montserrat postal history which features 101 lots. 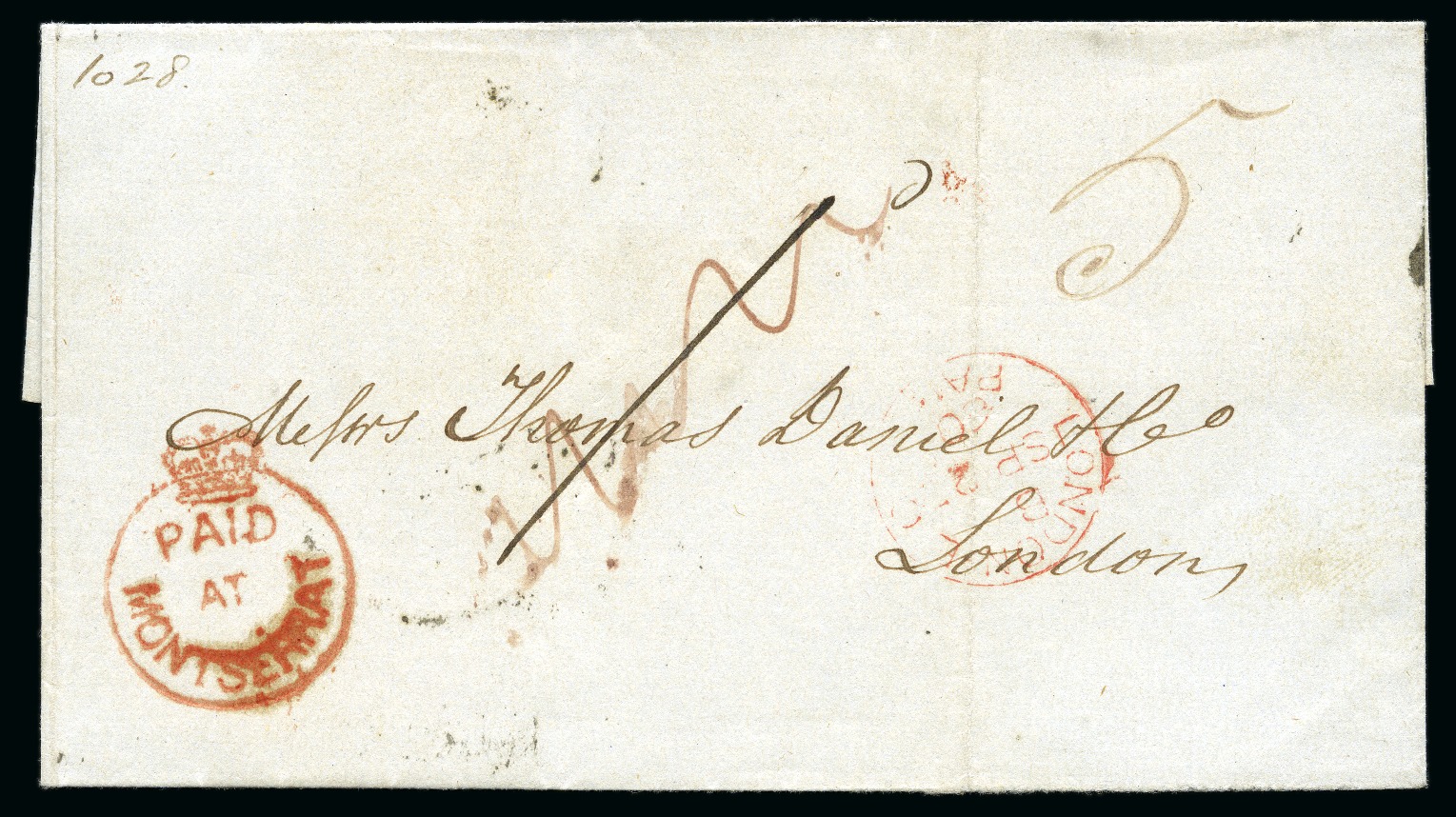 Lot 10296 is a striking handpainted essay from the “Tatiana” collection of St. Vincent. The design is similar to that of Trinidad 1883 issue and is inscribed “St VINCENT REVENUE” at top with void value tablet below. It’s painted in mauve with details in Chinese white on tracing paper, and also shows the handpainted value tablets below. It originates from the De La Rue archives, which were sold by Robson Lowe in the 1970s. 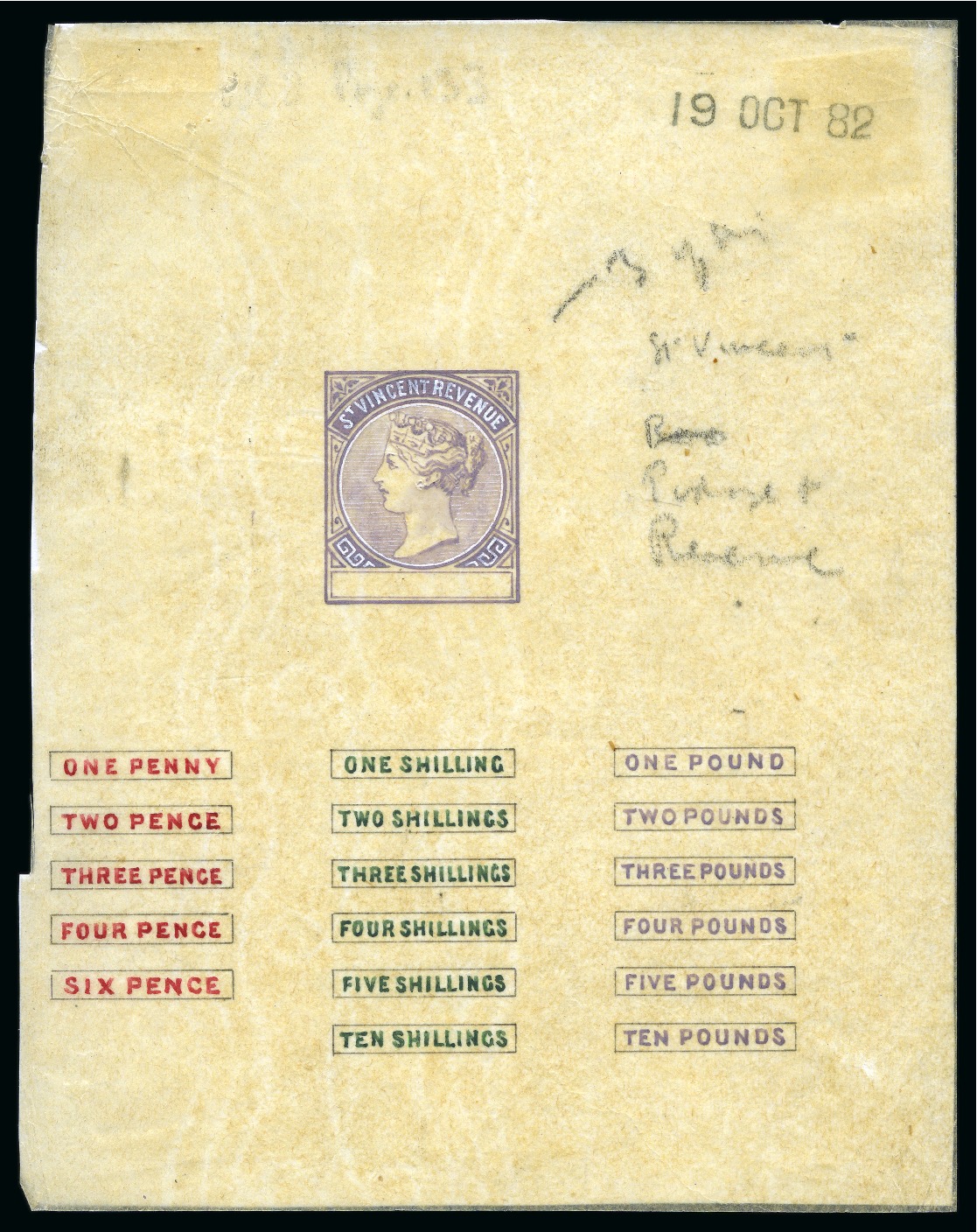 Lot 31415 is an example of a KEVII undemnominated master die proof from Gibraltar, and is a part of the “Tatiana” collection of Gibraltar. It is stamped with the date and “BEFORE HARDENING”. This means it was a proof strike of this die taken before it was hardened ready for creating the printing plate. These De La Rue proofs are also known struck with “AFTER HARDENING” or “AFTER STRIKING”. 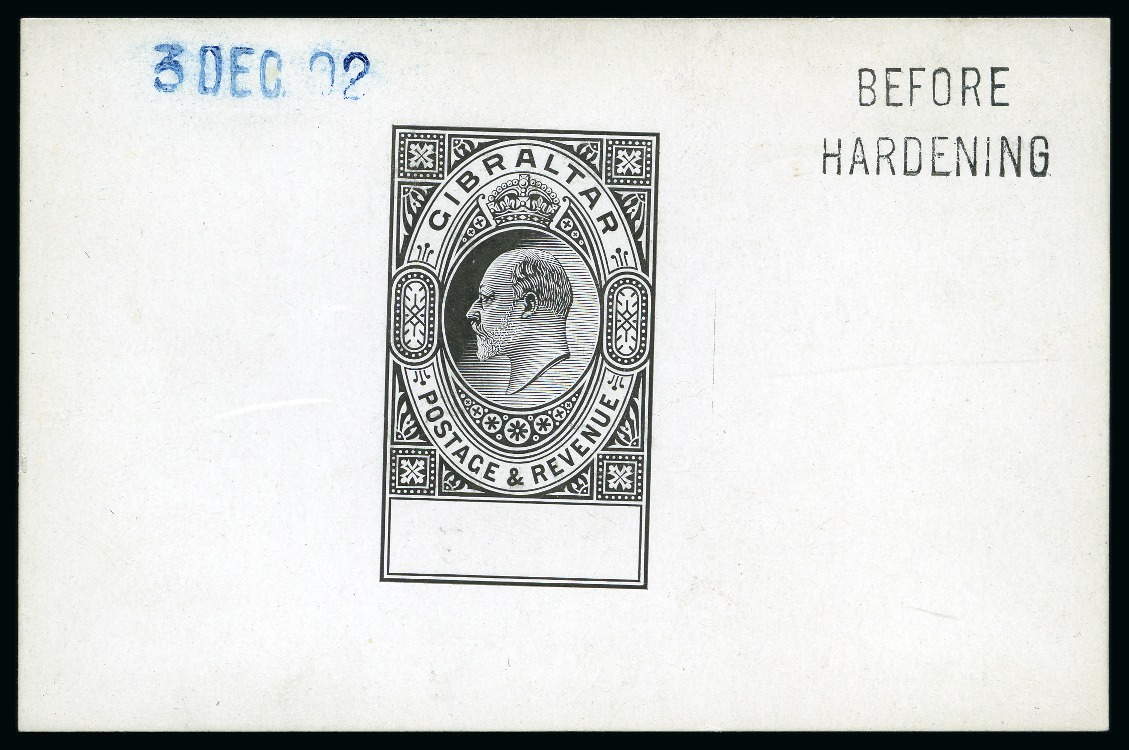 Not wanting to show any bias towards De La Rue, here are lots 30802 and 30803 which are Perkins Bacon colour trials of the 1854-59 Diadem 6d from our section of the “Tatiana” collection of New South Wales. They are still on their original archive pages, although when they were sold in the Slade-Slade sale they were still joined together. Each stamp has one corner waxed-over and alongside there is the manuscript ink recipe endorsed alongside. They’d make a very attractive addition to a specialised collection of these issues! 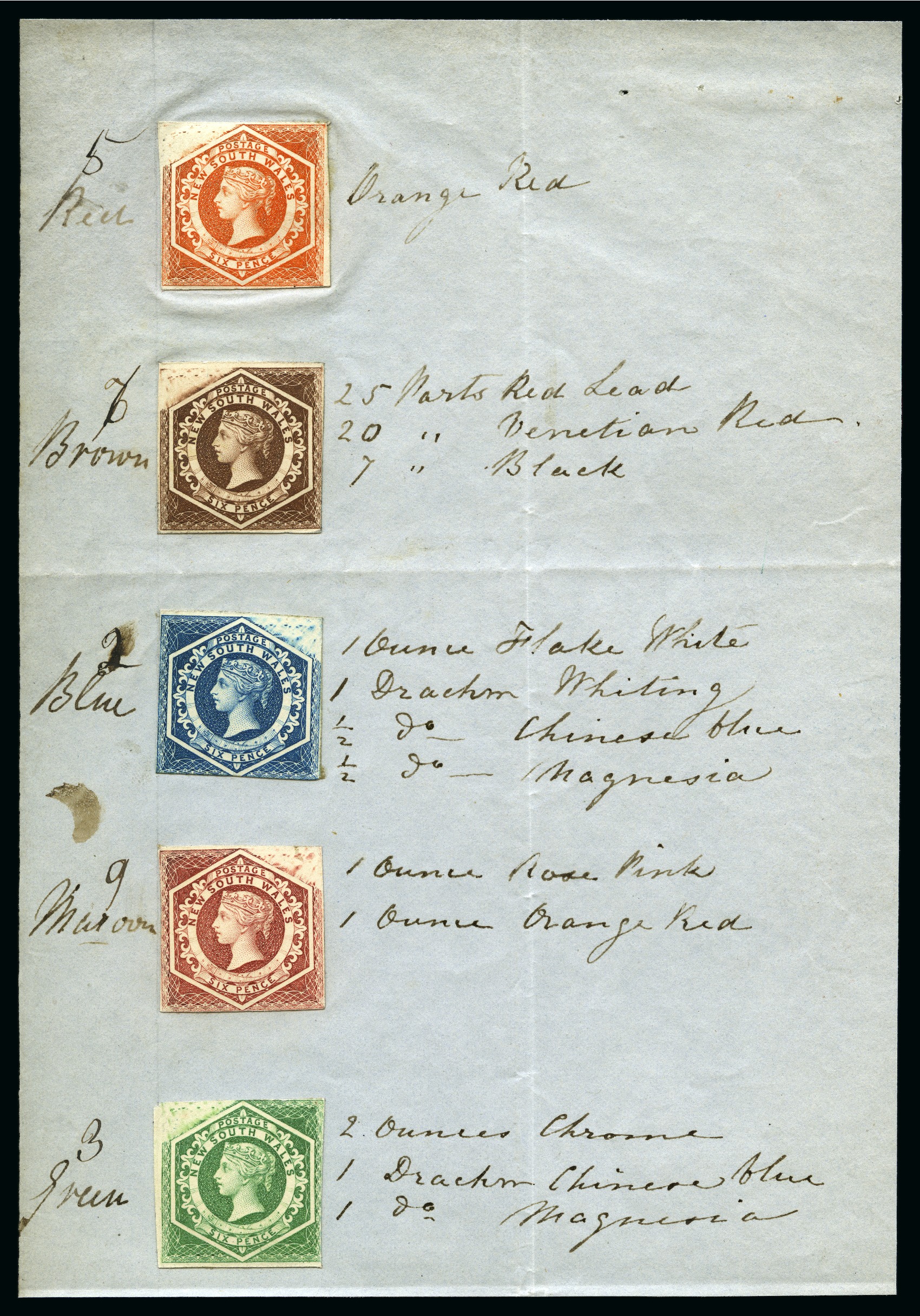 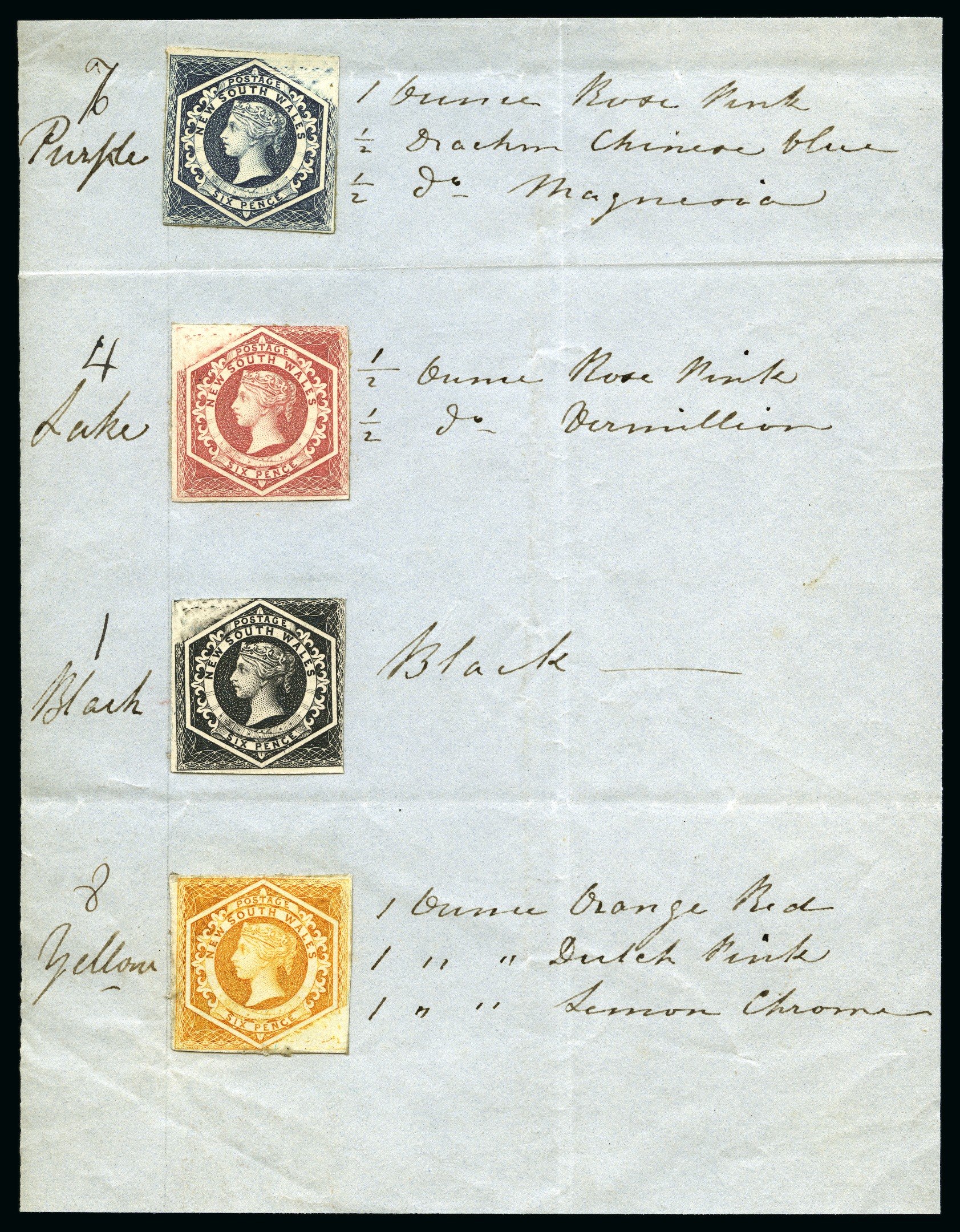 I could have made up this whole article with items from our section of Great Britain in our upcoming June 30th-July 2nd auction, but I’ve chosen to talk about the imprimaturs we have on offer. These imprimaturs were taken from the registration sheets that were kept by the post office for their reference. The majority were unperforated, and over the years stamps were officially removed from these sheets; many of which have since come onto the public market. The quantities taken vary for each stamp, but for most of the surface printed stamps only around 20 were taken. Lot 30139 is a unique marginal example of the 1865-67 4d vermilion pl.10 showing the current number “276”. 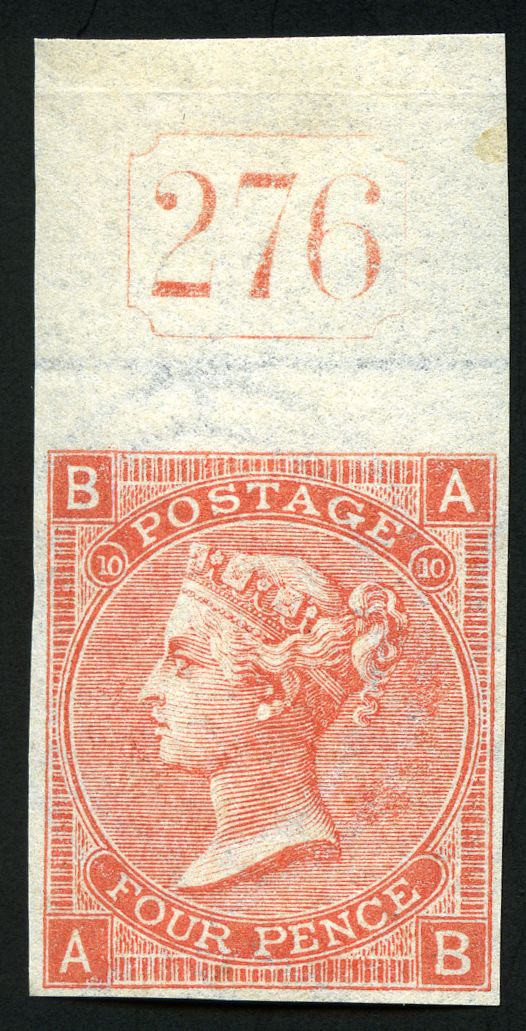 There are many stamps with “Specimen” handstamps or perfins throughout the sale, but one of the rarest is the “Specimen” overprint on the India 1948 Gandhi memorial issue. Rarer still is lot 31633, the set of four with Specimen overprints in the original Courvoisier presentation folder, mounted on golden metallic pages with interleaving and a black felt cover with a gilt state emblem of India. For those with a more modest budget, we also have on offer lot 31634, a single 10R Specimen (pictured), which is part of a group of 26 lots of this popular Gandhi issue, including the “SERVICE” overprints. 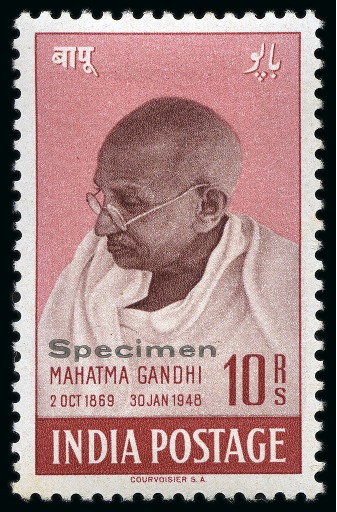 Varieties take many forms in terms of printing, perforation and overprints. The most spectacular printing variety, or more correctly, printing error, is lot 31813; the Jamaica 1919-21 1s orange-yellow with inverted frame. Less dramatic and more of a “freak” printing variety in the section of Jamaica from the “Tatiana” collection is lot 31814, a 1921-29 2s where the lower third of the brown frame of the stamp has been printed double. 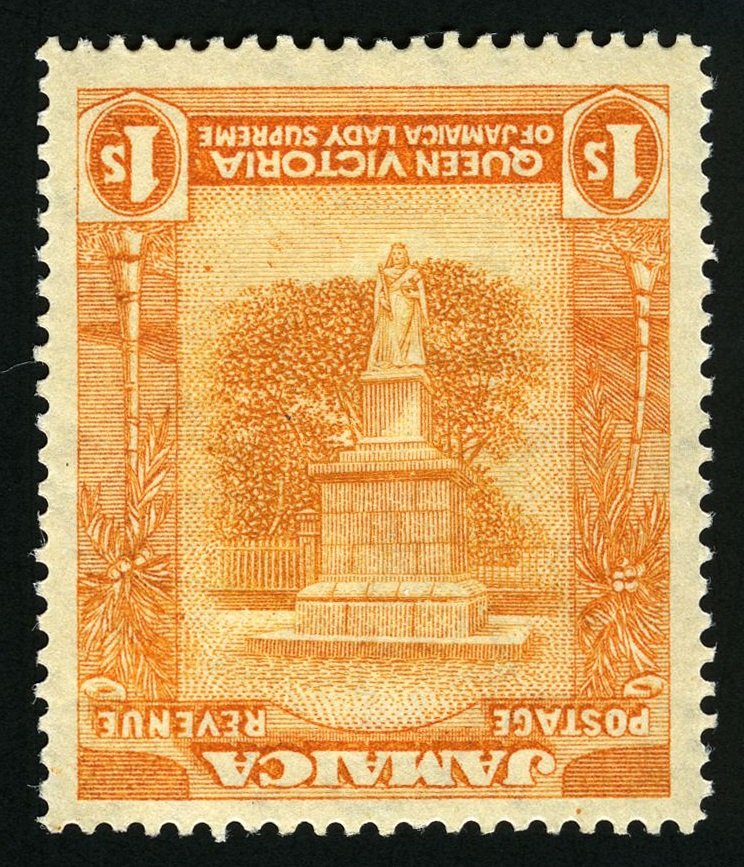 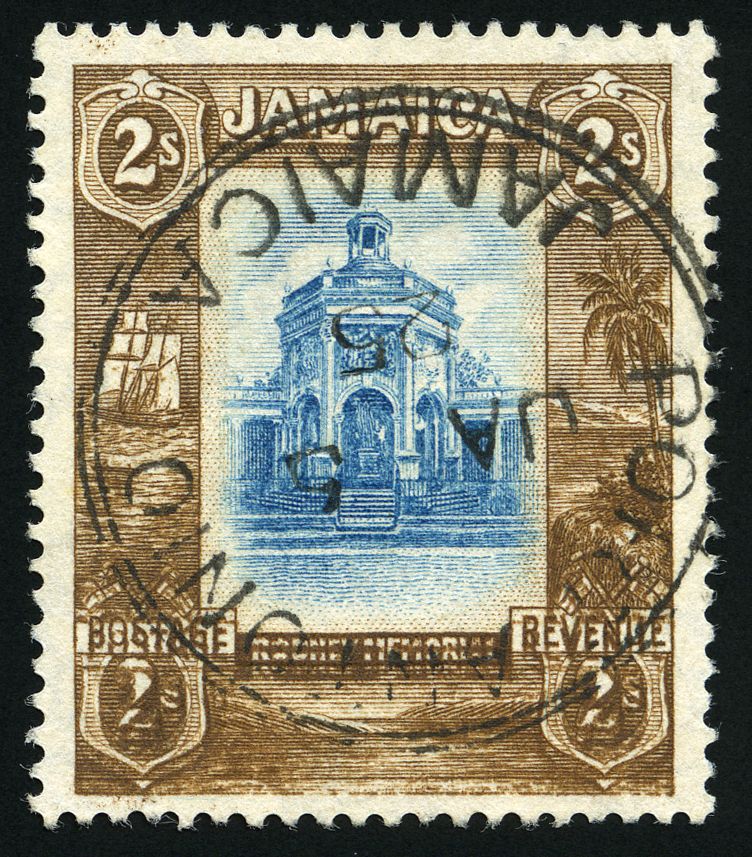 I couldn’t talk about multiples without talking about the “Tatiana” collection of Cyprus, which features a wealth of blocks from the very affordable to the rare and expensive. I had already highlighted several of the important items in a previous article for the digest, but with so many to choose it wasn’t hard to find another one to highlight. Lot 31213 is a lower corner marginal plate block of six of the 1880 1d red, showing the plate number “196”, which happens to be one of the scarcer plates as well. 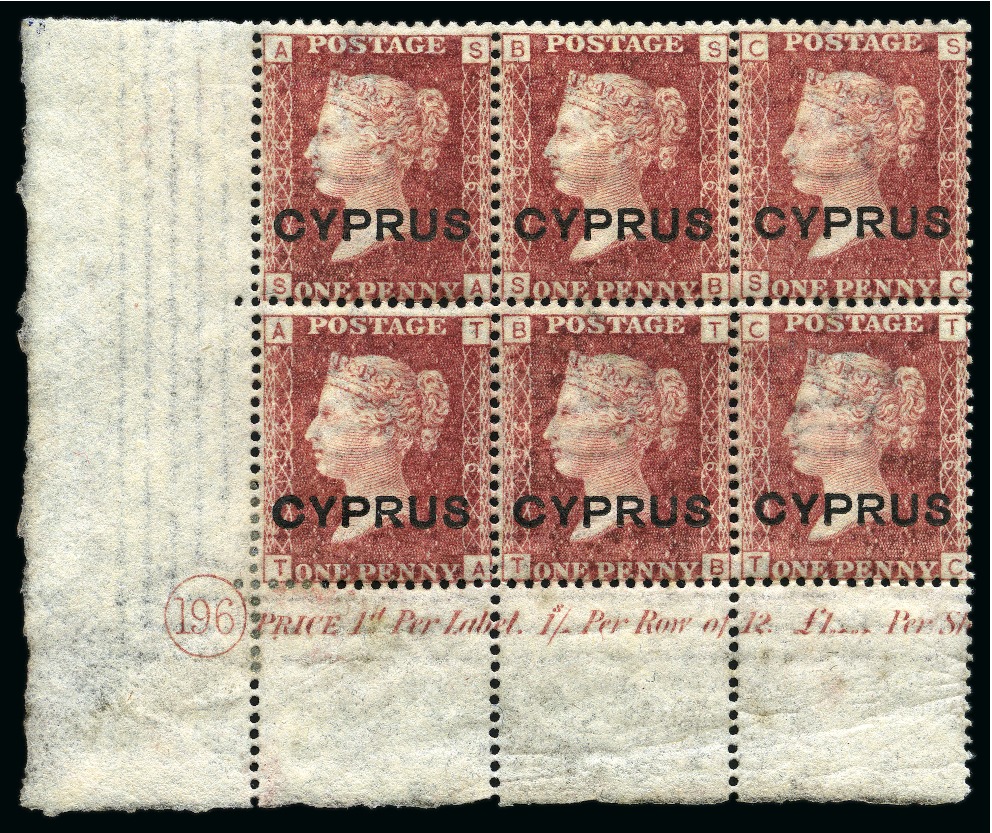 Postal history can be desireable to a collector for an abundance of reasons; the origin, destination, route or franking to name the main ones. But some would definitely say that eye-appeal is one of the most important factors. Lot 31507 (pictured) is one of seven covers with Hong Kong and China mixed frankings we have in the sale, and probably the most attractive. It was sent registered from Kiukiang via the British Post Office in Shanghai which used a Hong Kong 30c for onwards transmission of the cover to Germany. 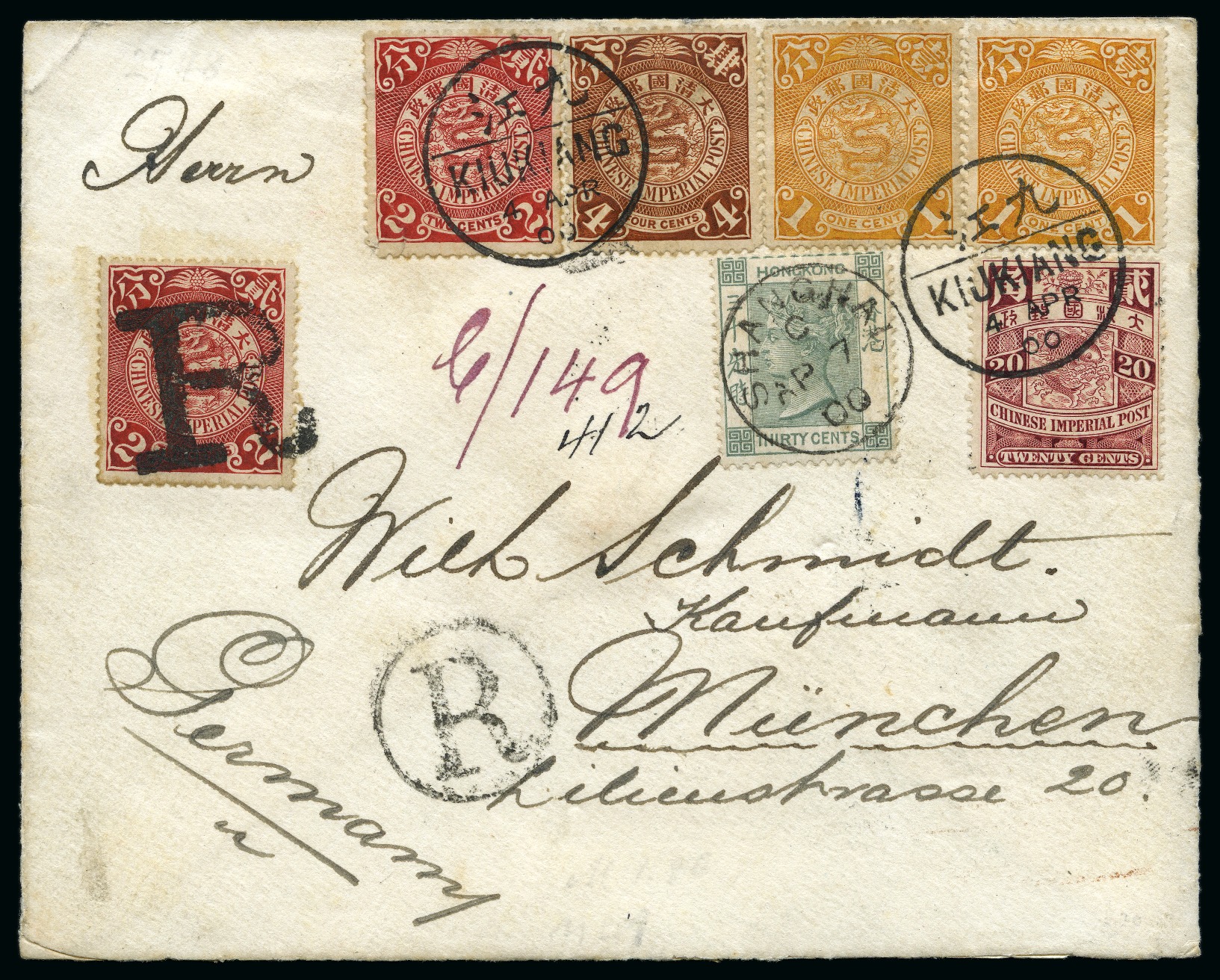 View all the lots and Bid today