‘Provenance’ has a practical application in the world of philately. It provides a chronology of the ownership for rare and valuable items, which is a powerful tool in establishing the authenticity of material being presented for exhibition or for sale.

And, there’s another contribution ‘Provenance’ makes, which is a lot more emotive, and immeasurably more powerful when it comes to appeal and prices, especially if the ‘Provenance’, is unique.

Our featured stamp is one just example.

On the surface, it’s the rather unusual Great Britain ‘Abnormal’ 9d straw printed from Plate 5, which was registered in April 1866, but ‘never’ put to press.

Now these are rare stamps, with just 12 unused singles known in circulation, they were taken from the imprimatur sheet, and seemingly perforated by De la Rue, and formed part of the mementos given to those who sat on ‘The Stamp Committee’ that met between 1884 and 1887 and which resulted in the production of the ‘Jubilee’ issue of 1887-1892. At auction these always fetch decent prices, as you might expect, but none reach the dizzy heights of this particular example.

Why? Because the ‘provenance’ in this case is rather more ‘rare’ than the stamp itself. It is the only stamp that King George V sold from the Royal Collection in his lifetime, and even more fitting is that he donated it to the 1915 Philatelic War Fund auction. The stamp was mounted on a card and inscribed in the handwriting of Sir Edward Denny Bacon, then Curator of the King’s Philatelic Collections, and signed by the King himself. The inscription reads: 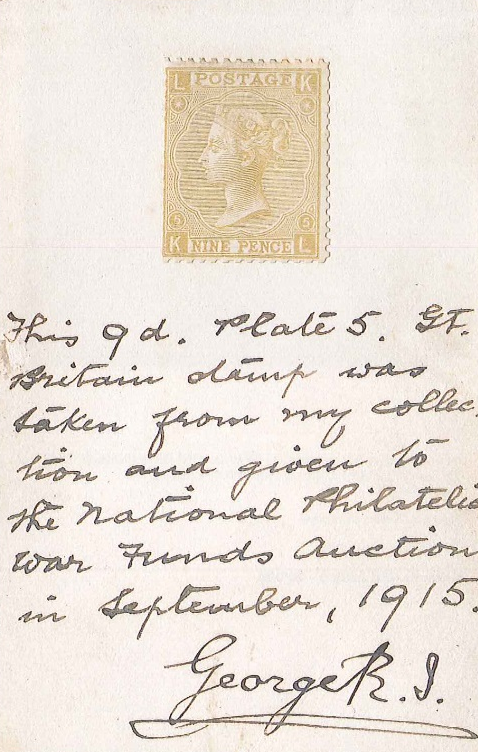 “This 9d. Plate 5, Gt. Britain stamp was taken from my collection and given to the National Philatelic War Funds Auction in September 1915.

The King’s generosity resulted in £525 being raised for the War Fund and it’s ‘unique’ provenance has meant that famous collectors such as; Louis O. Trivett, Arthur Hind and Hassan Shaida have subsequently wished to add it to their collections. In fact, the latter, Shaida, who sadly passed away recently, was a renowned British Philatelist and winner of two International Grand Prix awards for his GB Queen Victoria exhibits, who sold the stamp through a David Feldman Rarities of the World Auction, in May 2005. It was Lot 60045 and the winning bid was a mouth watering 69,915,00 Swiss Francs. Hardly surprising when the entry in the David Feldman auction catalogue reads: ‘Provenance: King George V, Trivett, Hind, Shaida.’

As we know, King George V was a philatelist after every philatelist own heart, that is to say he wasn’t a Royal collector who went through the motions for the duty of the job, he was a stamp collector in every sense of the word, and a legendary contributor to the cause of philately.

No doubt selling something from his collection wasn’t a decision he took lightly, a fact that is demonstrated by the number of times he did such an act. And like most of us, parting with a rare stamp from our collection isn’t something a collector does unless there is good reason. The exception in this case was a good cause. Some might say a unique cause. The War Fund. You want to win a war, you have to make sacrifices. And the King did exactly that. He donated a stamp.

And you know what? We can emulate our King of Philately and fellow philatelist, if we want. There is a unique opportunity ‘today’ to support a war fund using rarities from our collection. It’s the war against COVID19 that is being fought by Médecins Sans Frontières (Doctors without Borders). They don’t battle with weapons, they fight with compassion and medical expertise, in places nobody else wants to venture. That’s a unique cause.

‘Provenance’ contributes something practical and emotive to our philatelic world. In really special cases, it adds something unique. And that is selling a philatelic item to fight a war.

David Feldman SA partners with Médecins Sans Frontières (Doctors without Borders) to help in the fight against COVID19.

Also read our article about ‘why’ you should get involved in the MSF Charity Auction in October 2020.