It was with sadness that we learned of the passing of Manfred Bergman in July this year, whose enthusiasm and knowledge of Olympic philately and memorabilia was a guide and support for David Feldman and the company since David first settled in Geneva in 1973. Over the course of nearly 50 years, David Feldman has sold the best collections of Olympics ever formed, and Manfred was ever present with his expert knowledge and advice as well as his attendance in the auction room. The following is the first part an English translation of an article he published in 2013.

Introduction
On June 8, 1913, the celebrations for Emperor Wilhelm II’s 25th anniversary on the throne began. The inauguration of the “German Stadium”, where the 1916 Olympic Games were to be held, was the prelude. They looked forward to these games not only in Germany, but most importantly also in other countries around the world. However the murder in Sarajevo and the outbreak of the First World War abruptly interrupted these preparations.

These preparations are the subject of a study of over 200 pages. Here an extract is presented. In order to document the events, not only the philatelic endeavours, but also other memorabilia, ultimately all that is nowadays understood by “global collecting”. Thus, this representation also sees itself as an inspiration for how to tell Olympic history with collectibles.

Overall, the collectibles of the 1916 substitute games are also attractive. This study also sees itself as a guide to help prevent collectors from acquiring items falsely declared as “Olympic Games” and to use them without comments and to critically question catalogue descriptions and not to pay excessive prices for incorrectly described Olympic items.

The games of 1916 were not cancelled, only “not held”, – forgotten nevertheless, they were not. So in its place, Sweden held the “Svenska Spelen” in the Olympic year. In Holland, they put together the National Olympic Games. Other events can also be documented. The non-Olympic Games of 1916 – as well as those of 1940 and 1944 – are a fascinating subject for collectors. So why shouldn’t you present the details of the preceding events in your collection? 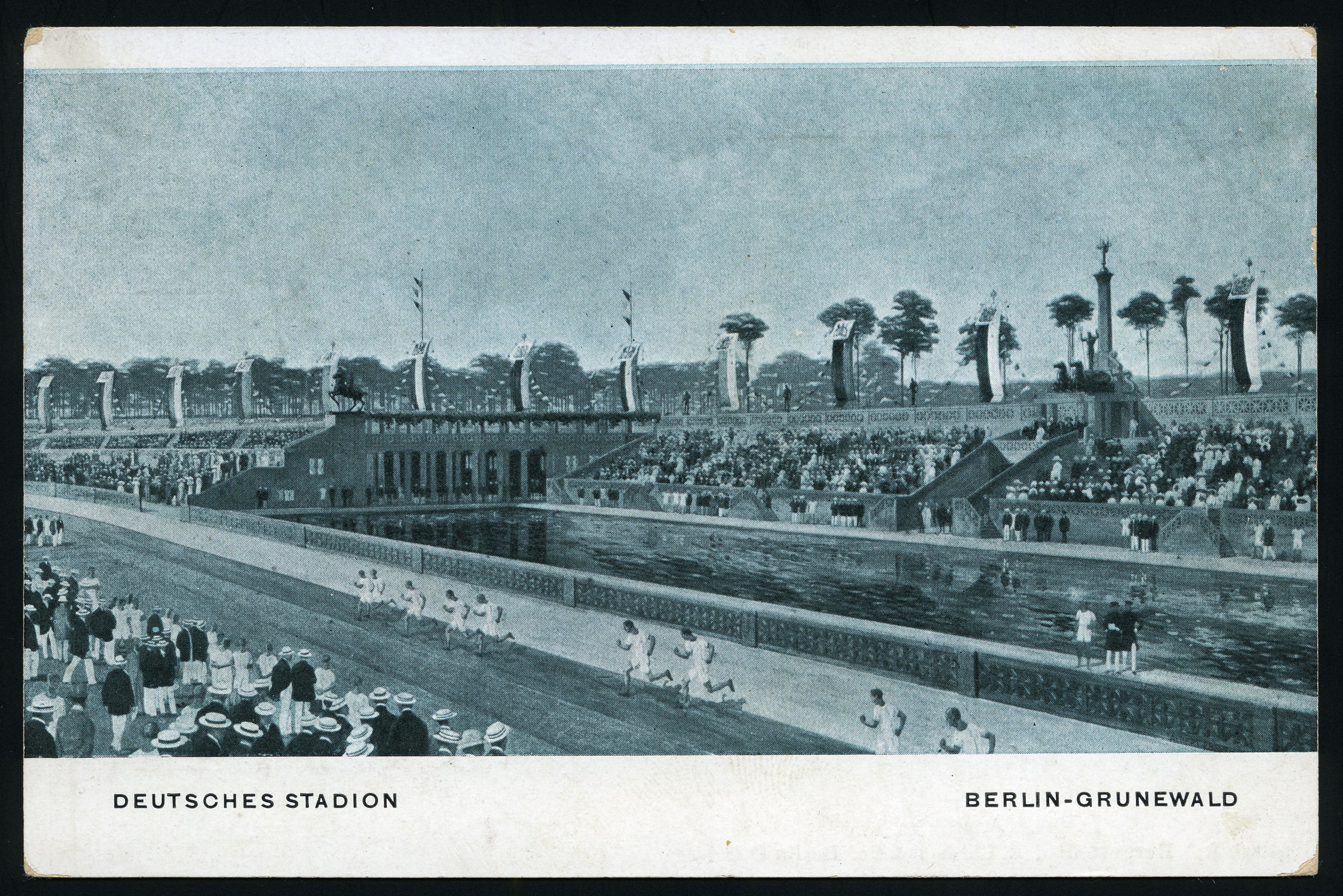 The “German stadium” was intended as a central location. Construction began in 1912, and it was completed after 200 working days. The official opening took place on 8 June 1913. For the rowing competitions, the regatta course was
Grünau has been selected.

The event started at 12 o’clock and ended at 7 o’clock. A special post office was established in the weighing room of the riding arena. Postcards posted there are testimonies of the activities on the opening day.

12 o’clock
Entrance of the athletes
A biplane flies over the stadium
Official postal stationary with the special stamp (12-1 N).

12: 20 pm
The emperor arrived at the stadium with his wife. Viktor von Podbielski, the DRAfOS president, entered the Podium and stated in his opening address:

“A place is created for peaceful competitions, called to promote the physical strength of willpower, to cultivate patriotic spirit!”

After the speech and during the Imperial anthem, came the noise of 10’000 fluttering Pigeons from the military the stadium. 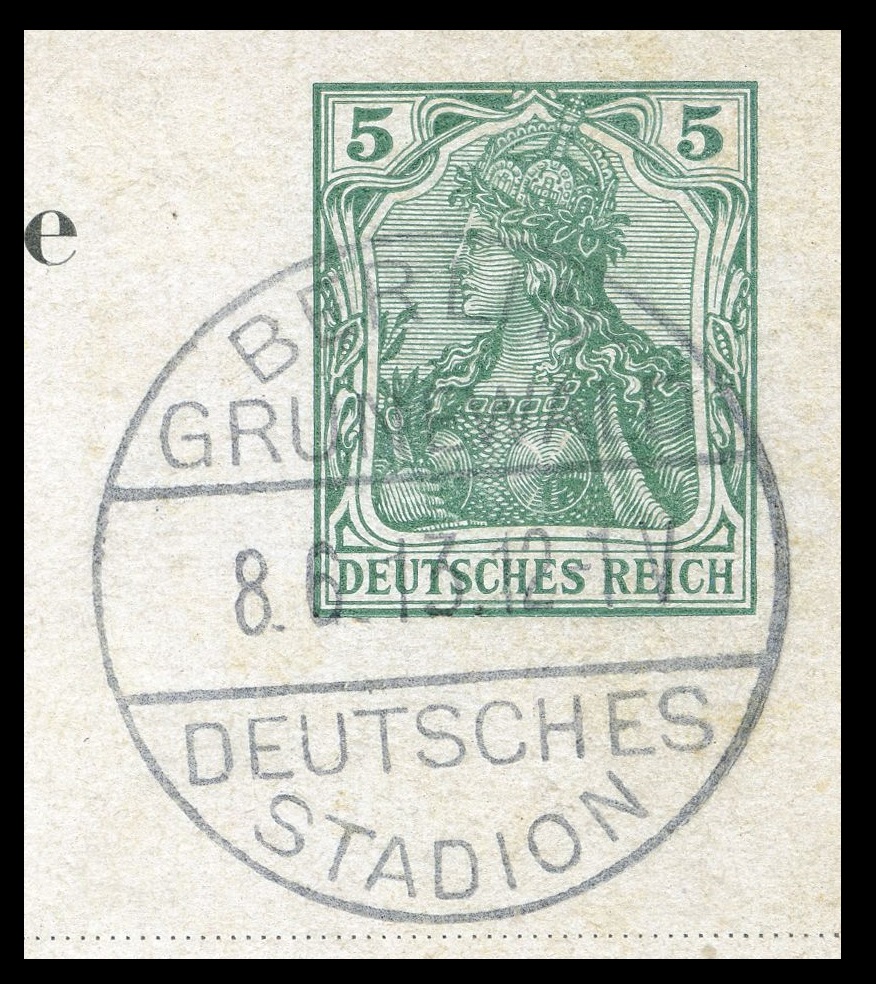 12:40 PM: March-past in honour of the 25th anniversary. The parade was led by members of the DRAfOS, you 10,000 followed Gymnasts, tennis players, swimmers, heavy athletes and cyclists.

The march continued with the athletes, followed by 4500 licensed footballers and ice skaters. This was followed by the “Emperor’s Homage to the Students”, which was recorded at the parade and immediately afterwards produced as an official DRAfOS postcard. The part of the parade was completed by the 8000-member delegation of the military-led organization “Jungdeutschlandbund”. The sporting presentations followed:

2-3 pm
13:57 -14:05
4×100 m relay of track and field athletes, at the same time show water jumpers samples of their skills. So far I have only seen one card stamped with this time. This is quite logical, as the sporting demonstrations were not over yet. The Emperor had not yet left the stadium, the ceremony was still in full swing. Why should you leave your seat because of a postcard?

During the performances, the Emperor and his entourage were served breakfast. Then he received an IOC delegation led by Pierre de Coubertin, gave an audience to some people, gave some awards and then left the stadium with his entourage to go to the rowing regattas in Grünau – more than 30 km away.

The relatively high number of cards cancelled between 3pm and 4pm is related to the completion of these events. On the way home or in the restaurant most of the cards were written. 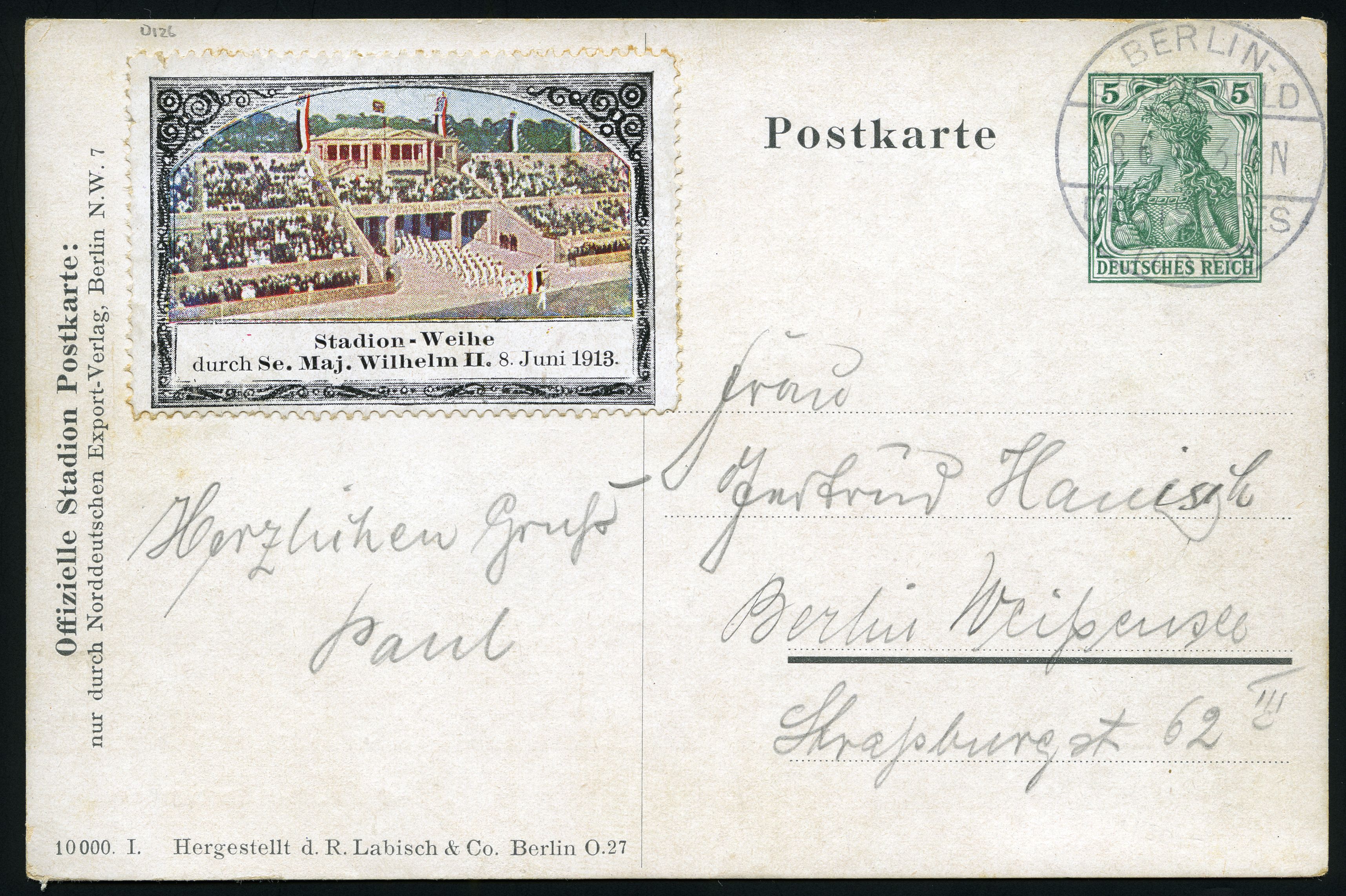 Lot 10301 in our upcoming Olympics philately and memorabilia auction, showing the official postal stationery card cancelled by the special cancel with time code 3-4, as well as the official vignette produced for the inauguration.

It was indeed a very lonely hour. No publication or other source reports on any event that would have taken place in the stadium at that time. For the spectators who were waiting for the football match, there was a break.

5-6 pm
6’000 spectators remain in the stadium to watch the final of the Crown Prince’s Cup (Kronprinzenpokal), in which West Germany and Brandenburg competed against each other. At half-time Brandenburg led 2-1.

In the second half of the game, the game gained intensity. West Germany played aggressively and showy by the result: They win the Cup with 5:3. 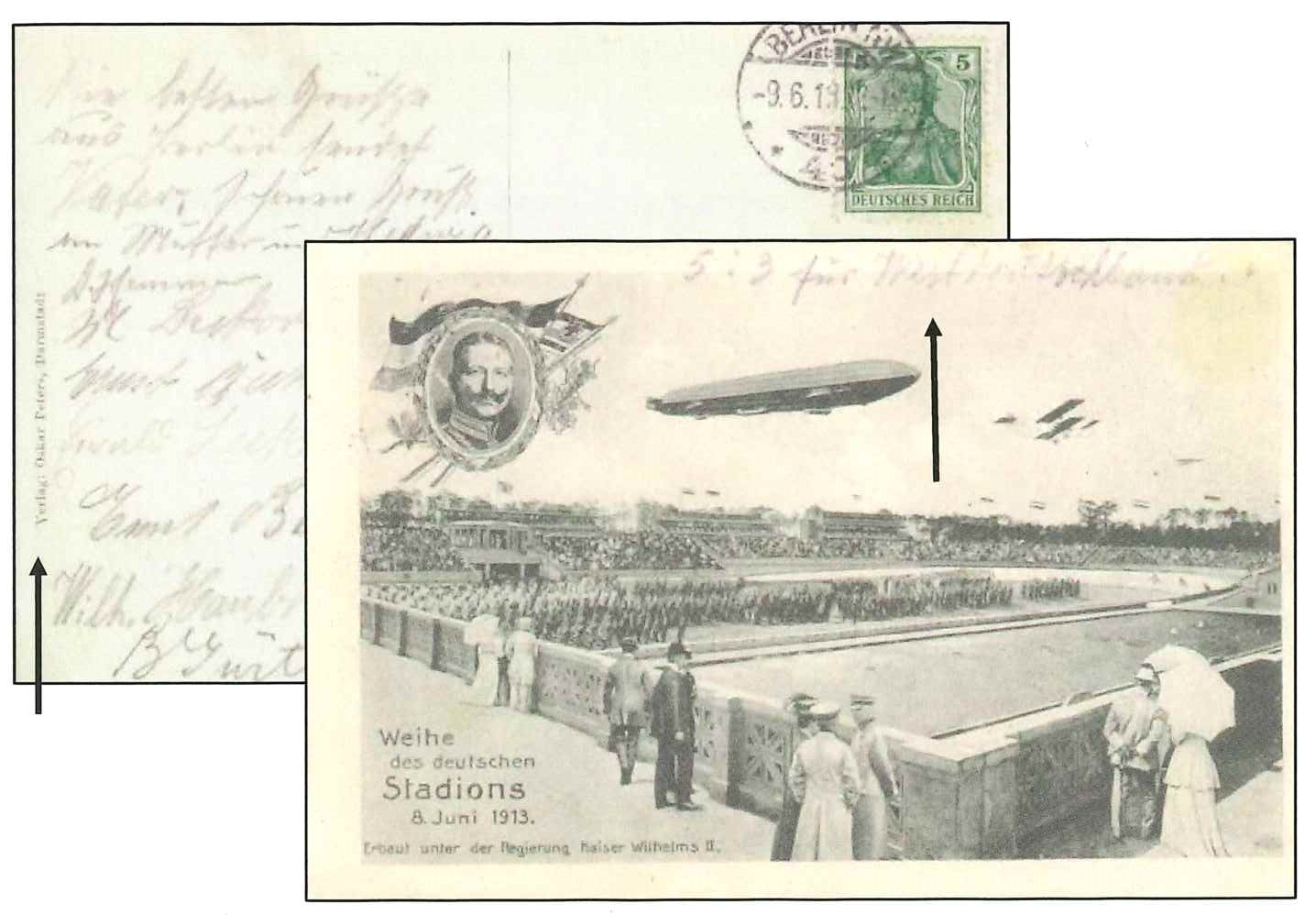 This private card (printed by Verlag Oskar Peters, Darmstadt) was written and signed by a group of visitors after the game, probably on June 8th, but not given up until one day later. It is the only card on which the result is handwritten.

7-8 pm
The Cup final lasted longer than expected. In view of the award ceremony and the closing speech, it was 8 pm before the last spectators left the stadium. It was assumed that the special post office closed at 7 pm, although a stamp with the time indication “7-8 N” was depicted in the Schneider catalogue. One postcard has been found so far, addressed to Italy, bearing this cancellation (see below) and reporting on “today’s grandiose inauguration celebration of the stadium”. The writer even lets himself out via the postcard, which he finds ugly. The card may also be used as evidence for foreign participants, as announced in newspapers. 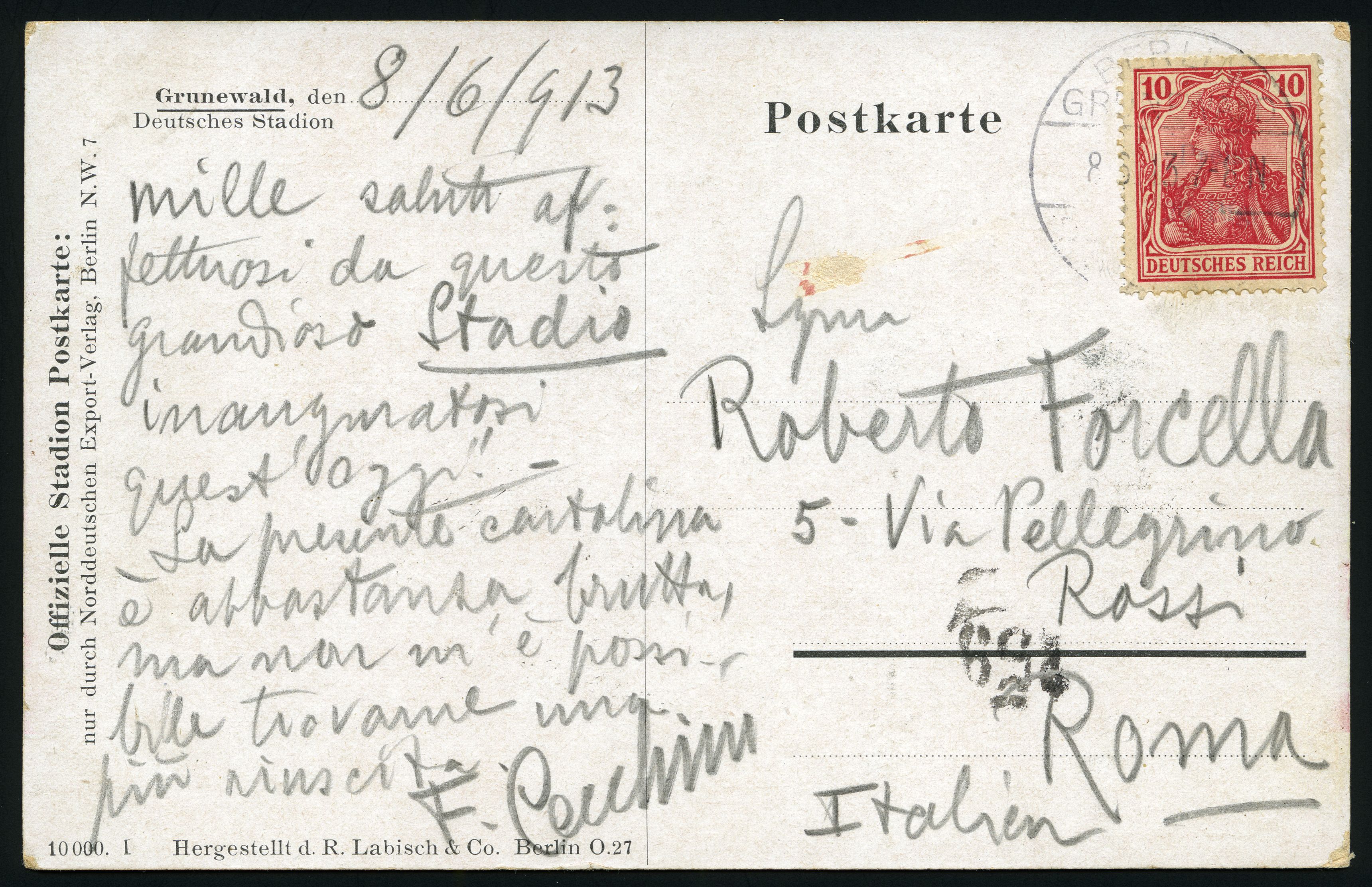 The crowd hastened to come home after the long day, and it is rather unlikely that anyone will still be after the special post office look. Already written cards were put into the mailboxes on the way home. The Italian visitors were they footballers? – have obviously more time and still went to the post office.

This concludes the report on the activities of the special post office on 8 June 1913. However, there are also reports of postcards that were written on that day on the occasion of the opening and sent outside the stadium grounds. This usually took place after 4 pm, when the main event was over. With the postmarks and postcards – 90% of which were produced before the consecration – the inauguration ceremony in the German stadium can be traced hour by hour – in an impressive philatelic way.

Part 2 will be published in the near future and will explore the National Games and trials that took place between 1913 and 1916 in preparation for the 1916 Berlin Olympics.

Our next specialised sale of Olympics philately and memorabilia, with nearly 1’200 lots, will be held on October 27th, 2020. The lots will be posted online in the next couple of weeks.