The Large Hermes Heads of Greece

Our Winter auction series from November 30th to December 4th features a wealth of rare and beautiful Greek philatelic material in our All World and Rarities of the World catalogues. Read on to learn more about this fascinating area of philately.

The first stamps of Greece were issued on October 1st 1861. However lot 40069 in our upcoming auction is the famous 30th of September cover which was sent the day before and is one of the most important items of all Greek philately. They were designed based on original essays and trials by the company Ernest Mayer of Paris (see lot 40062). They took the existing French first issue which portrayed Ceres in a circle and rectangular frame (see lot 70080, illustrated adjacent) and replaced the portrait with that of the Greek God Hermes, which was most appropriate as he was known as the Messenger God, who delivered messages between the Gods and the mortals with his golden flying sandals.

The printing plates had been made by the prominent French engraver Albert Barre, of J.J. Barre, producer of the first French postage stamps of 1849. Subsequently, the plates were transferred to Athens where they were used for printing of all the Athens editions until 1886. That first Paris issue was produced in a beautiful series of single colours for different face values of the stamps; 1 lepton brown, 2 lepta bistre, 5 lepta green, 10 lepta orange, 20 lepta blue, 40 lepta mauve and 80 lepta carmine, with all those colours produced over the period coming in a variety of shades.

Lot 40068: 80 lepta plate proof in block of forty from the bottom of the sheet inscribed in the the margin “Timbre poste grecs, specimen d’impression” in the engravers’s own handwriting and signed “Albert Barre 1860”

Very soon the stamps were selling out and there was an urgent need for replacement, especially for the 20 lepta which covered the popular domestic letter rate. A “copy” style of the Paris printing was hurriedly produced in Athens which is called the “provisional printing” (see lot 70084, which is a very rare usage of this stamp). Whilst on sale, an interesting and novel idea was introduced to prevent forging and to facilitate the ease in the recognition of the value of each stamp; to print the face value figure on the back of each stamp.

So the first regular Athens printing was a complete set of those “Large Hermes” portraits with figures at the back (see lot 40079 for an attractive five-colour franking with this issue). These stamps were also soon sold out and other values were needed, and over the next 20 years that the Large Hermes Heads spanned, many different printings were made and have been identified by specialists based on the printing impression and the paper. 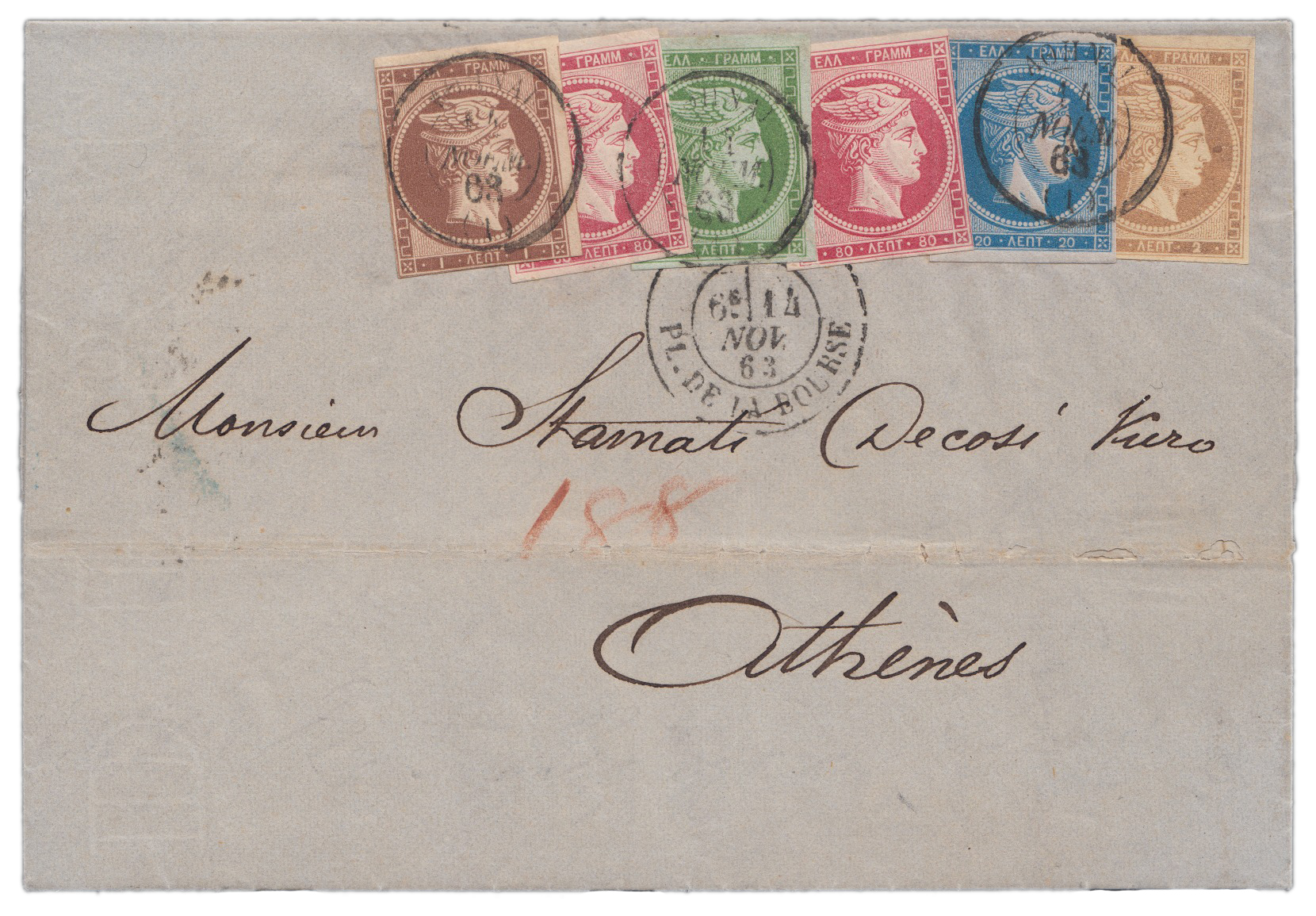 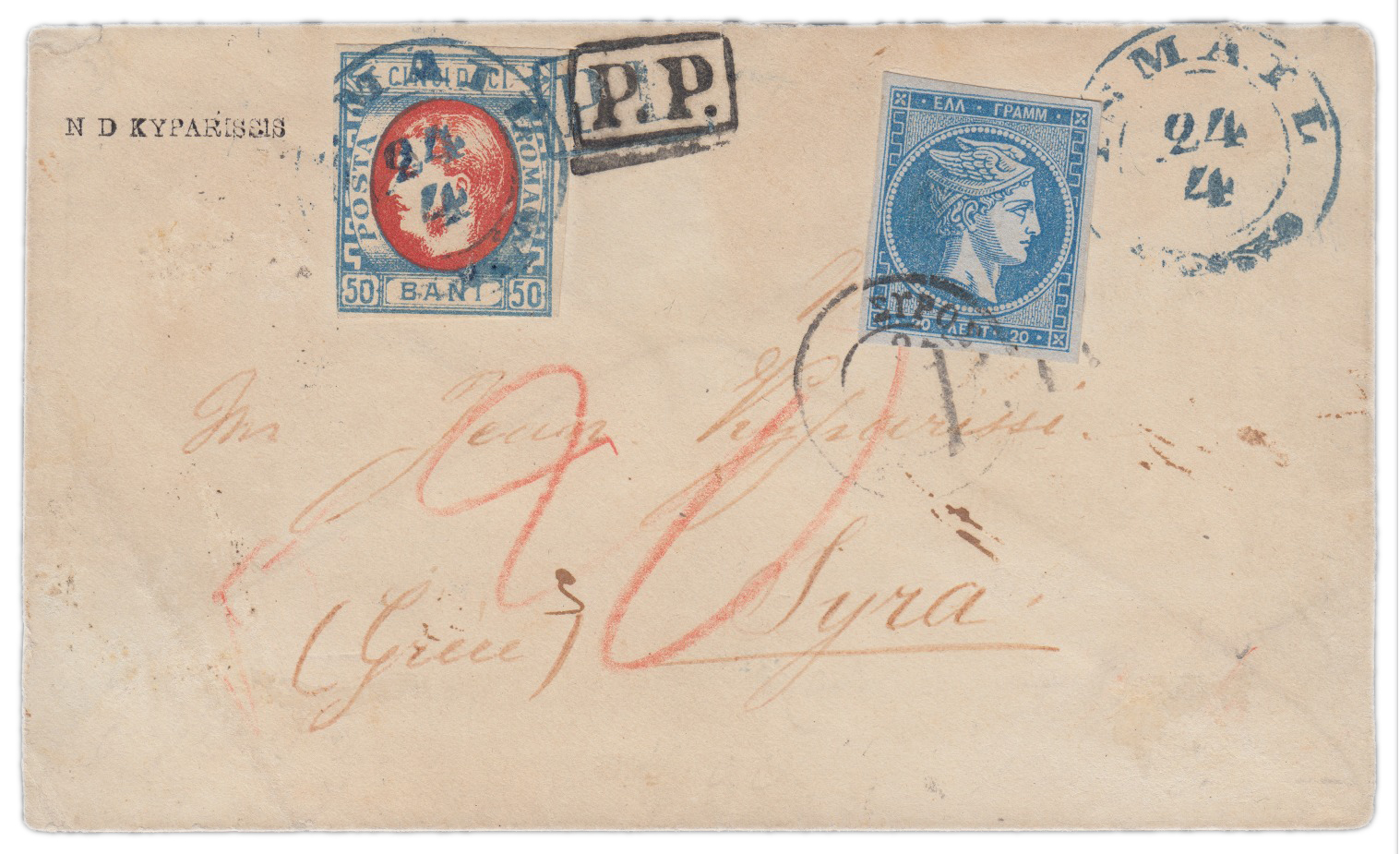 The Large Hermes Head stamps have also proved very popular and fascinating with international collectors. Their simple but elegant design, the variety of colours, the availability of blocks and even complete sheets and of course the extensive correspondence written from Greece as well as going into Greece. At the time, the Greek Postal Administration did not have postal agreements with other foreign administrations and so letters franked with foreign stamps coming from abroad were not recognised as having postage paid.

Accordingly “postage due” was raised and this was paid by affixing the regular Large Hermes stamps on the cover and letters on arrival. All of this gave an enormous wealth of colourful correspondence frankings and mixed issue frankings with many other countries, such as lot 40108, sent from Romania to the island of Syros.