There are many fascinating aspects regarding the Russian Zemstvo stamps. The first and defining one is that they take their name from the Russian institution of local government which went into effect during 1864 and effectively means they were a stamp used for local post, or rural post within Russia. Basically, the Imperial Post was predominantly set up around the towns, and as such rural areas fell between the gaps and it left long distances between villages and the nearest post office. Thus these rural stamps were produced to facilitate this local post. Initially it was an unofficial service but in 1870 the arrangements were formalised. Two of the greatest collectors of these often rustic looking stamps are the father and son philatelic duo from the famous Fabergé dynasty. Namely Agathon K. Fabergé (1876 to 1951), Russian born and probably better known as the son of the famous jeweler Peter Karl Gustavovich Fabergé, who was the creator of Fabergé eggs, and Oleg A. Fabergé (1923 to 1993), the son of Agathon, born in Finland, and who became a prolific philatelist and expert in Russian Zemstvo stamps. In fact, Oleg produced the book ‘Imperial Russia Zemstvo Post’, published by the Philatelic Federation of Finland, which contains reproductions, in colour, of Oleg Fabergé’s outstanding collection and exhibit of Zemstvos. 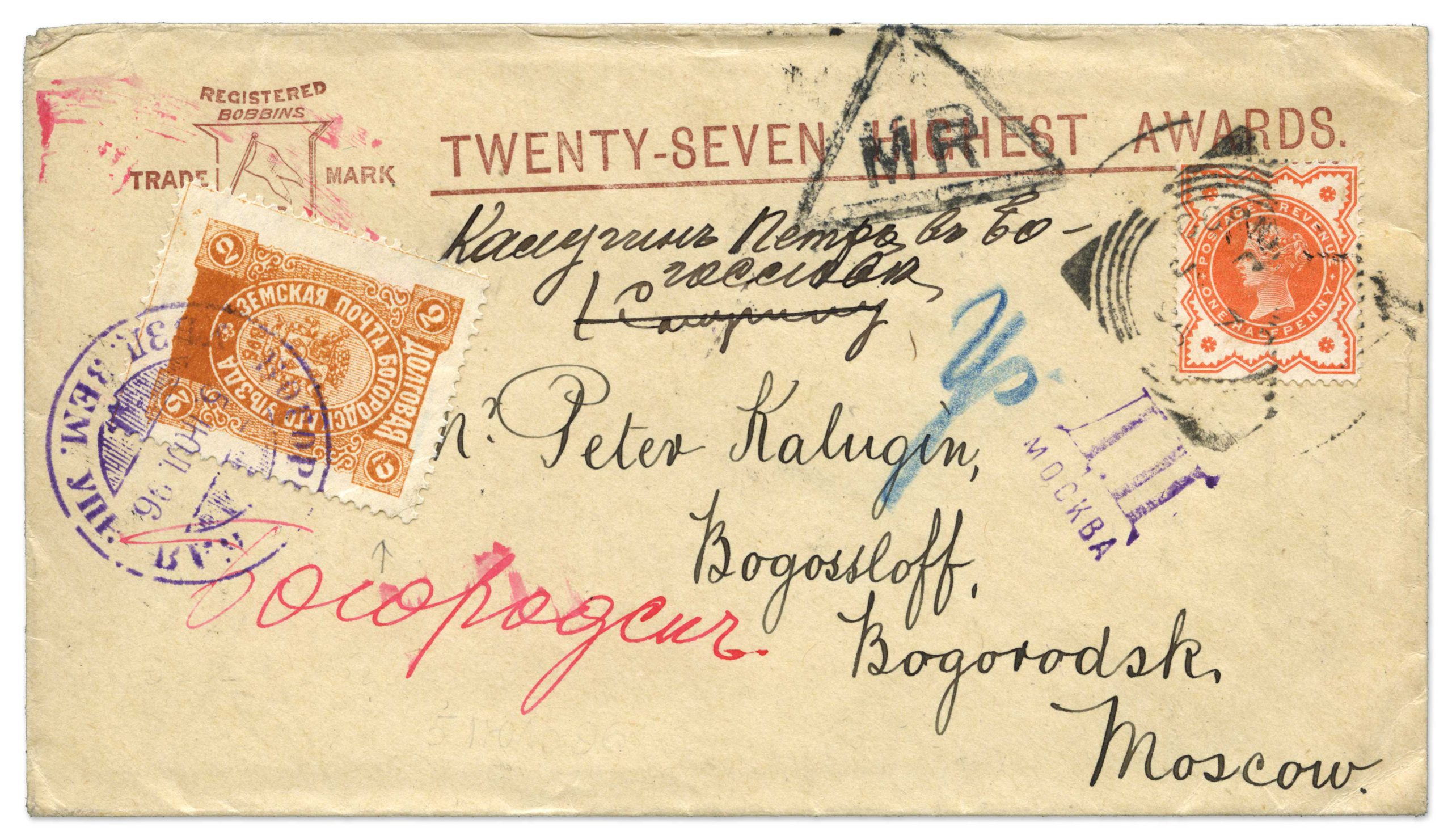 In our upcoming June 14th to 18th auctions we have a catalogue dedicated to Russia and Soviet Union, which includes the “Nikolai” collection, and in these the name Fabergé appears many times as part of the Provenance of many lots from this issue. Some of the material on sale even appear in Oleg’s book such as lot 30450 (pictured above), an 1896 advertising envelope sent from a village, quite appropriately, in Yorkshire, England to Bogoslov volost in the Bogorodsk district, which has a 2k yellow-brown Dolgovaya stamp in combination with a GB 1896 Jubilee. This cover, which is the finest of those recorded, is featured on page 58 of Oleg’s book. Whilst Oleg undoubtedly captured his interest for Zemstvos stamps from his father Agathon it is a philatelic fact that the latter was passionate about them. Many commentaries speak of Agathon’s pursuit of Count Ferrary’s Zemstvos during the sale of his collection in Paris during 1921-22. Indeed, running through the lots in this sale many items have the honor of being in both collectors’ possession at one time, and in some cases have also been in the exhibit of Oleg Fabergé. 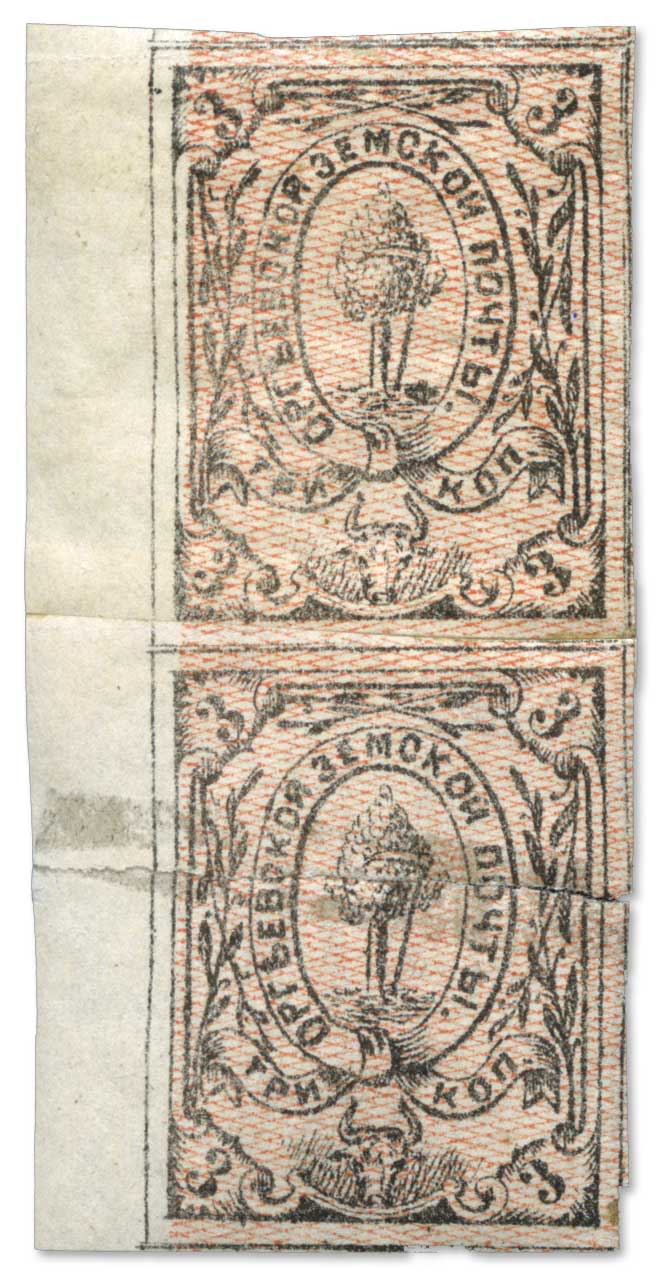 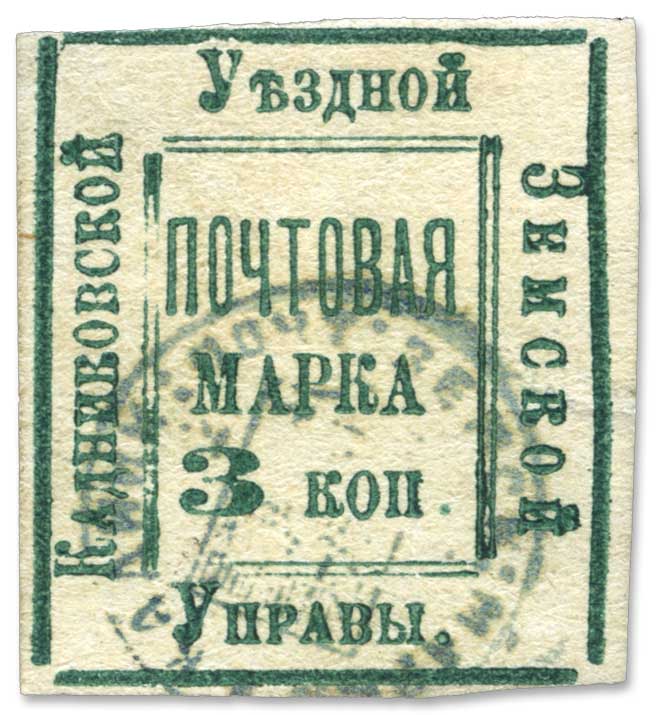 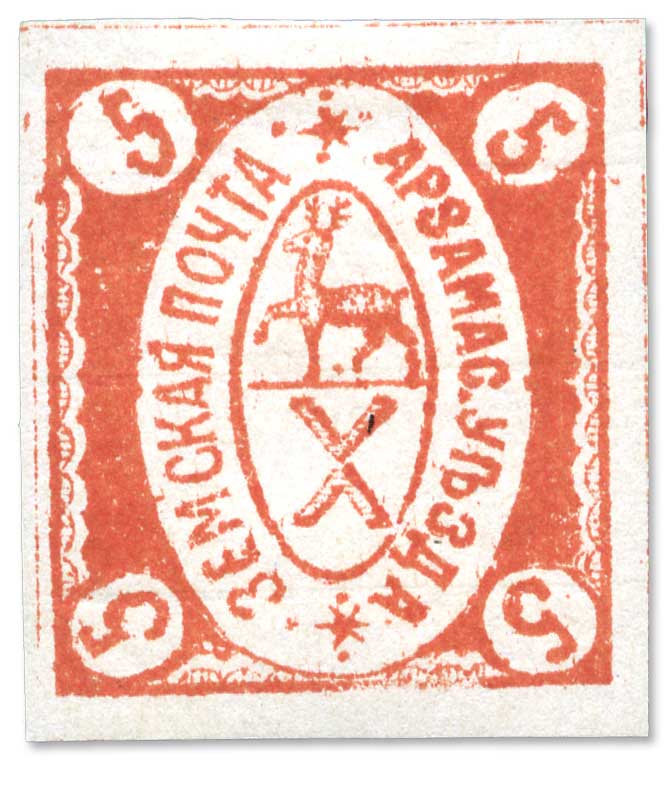 This sale also has many covers that exist in very small numbers, such as lot 30640 a Porkhov 1885 envelop used locally franked with a 5k violet tied by a blue oval datestamp, and lot 30569 (below) which is thought to be a unique Lgov 1898 envelope franked with a 5k blue with a violet Zemstvos cds and posted from the village of Sevenka. 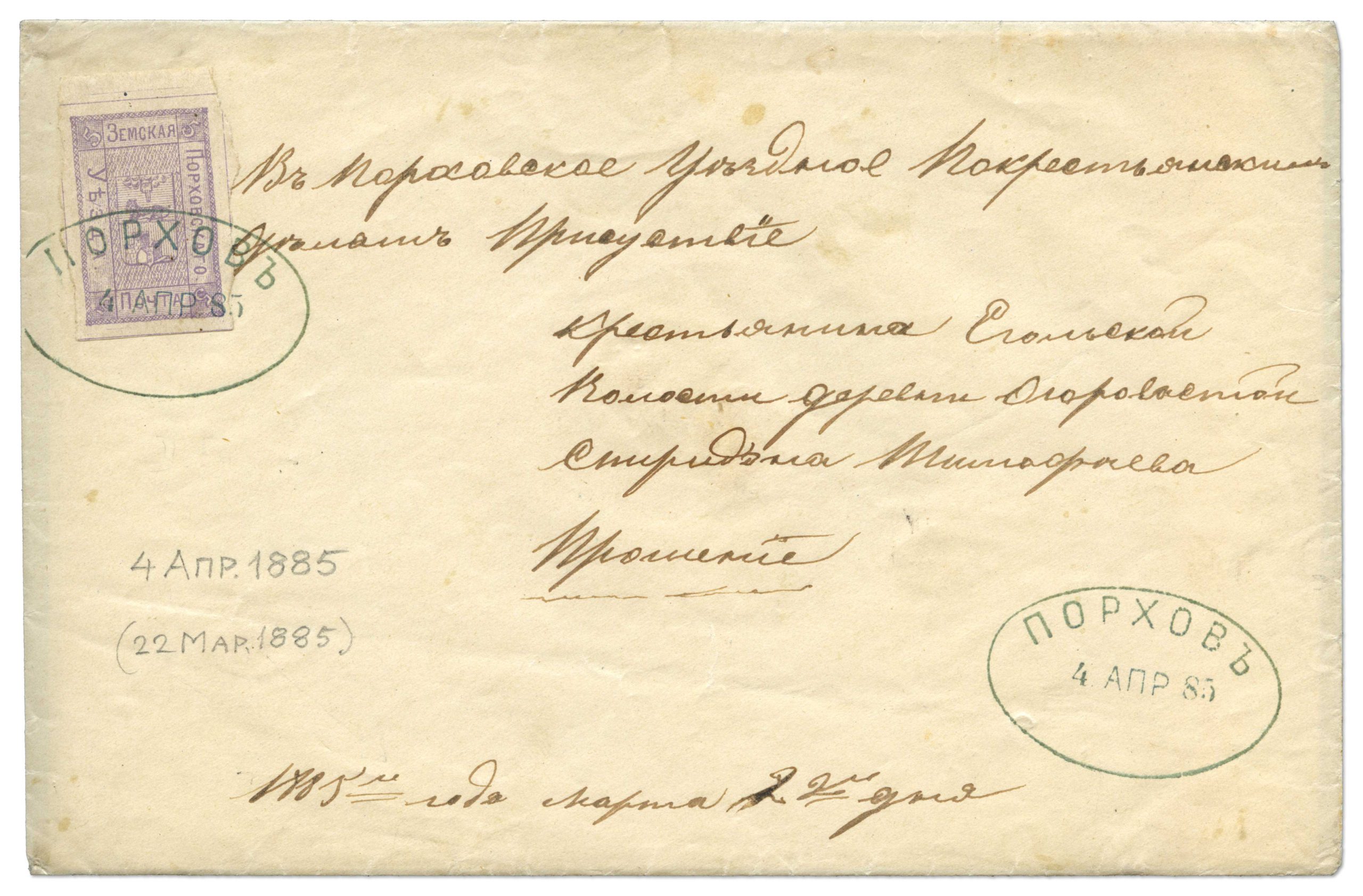 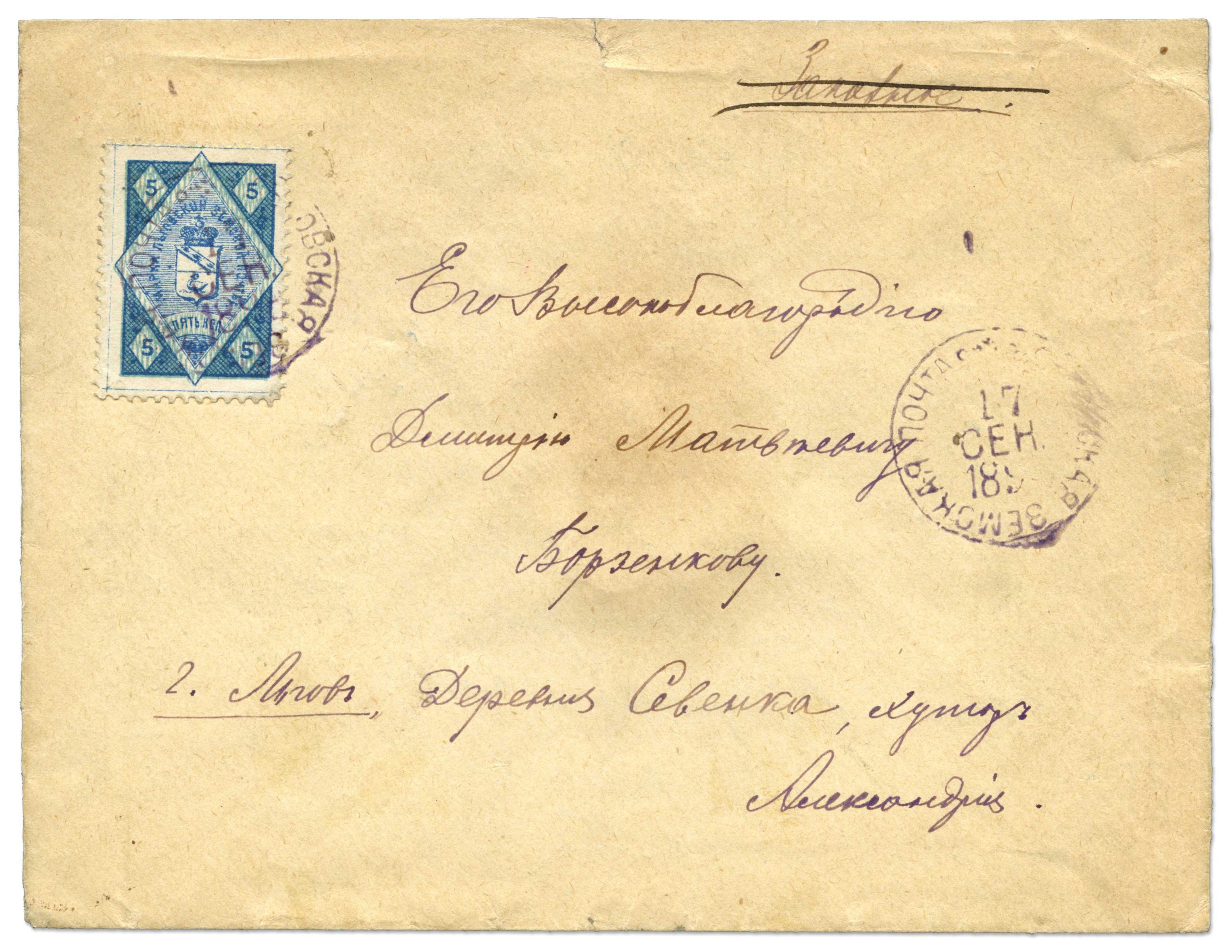 Two covers which are both ex Fabergé and very rare are lots 30675 and 30676, the former being a Tiraspol 1897 enveloped sent from the village of Tsibulevka and franked to the rear with a local 1887 5k and one of only seven cover recorded of this type, and 30676 is a Totma 1894 franked with a multicolour 3k with perf 11.5, sent from Kurakino volost which is from the small community of just 18 homeowners in Rezhsk community, a great rarity. 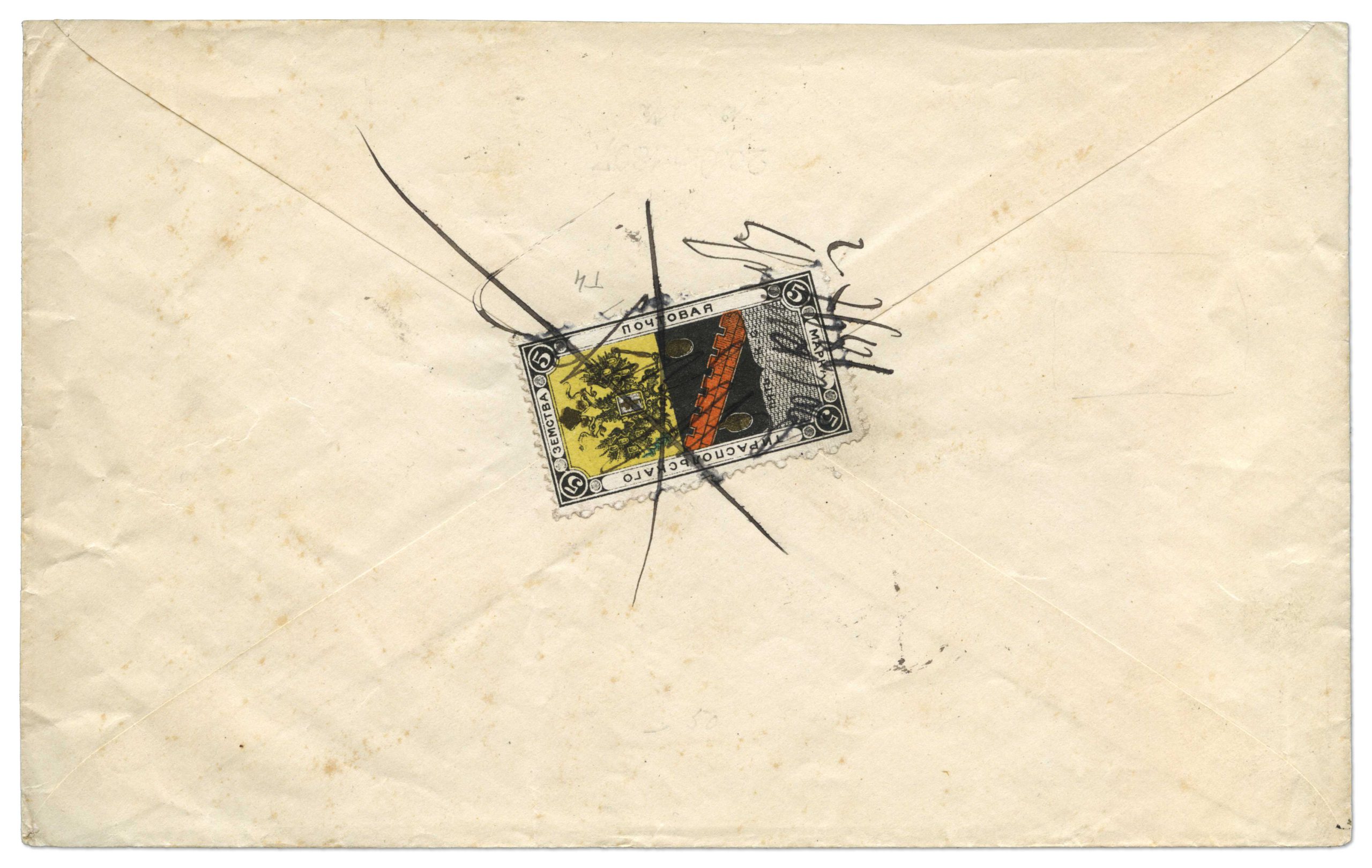 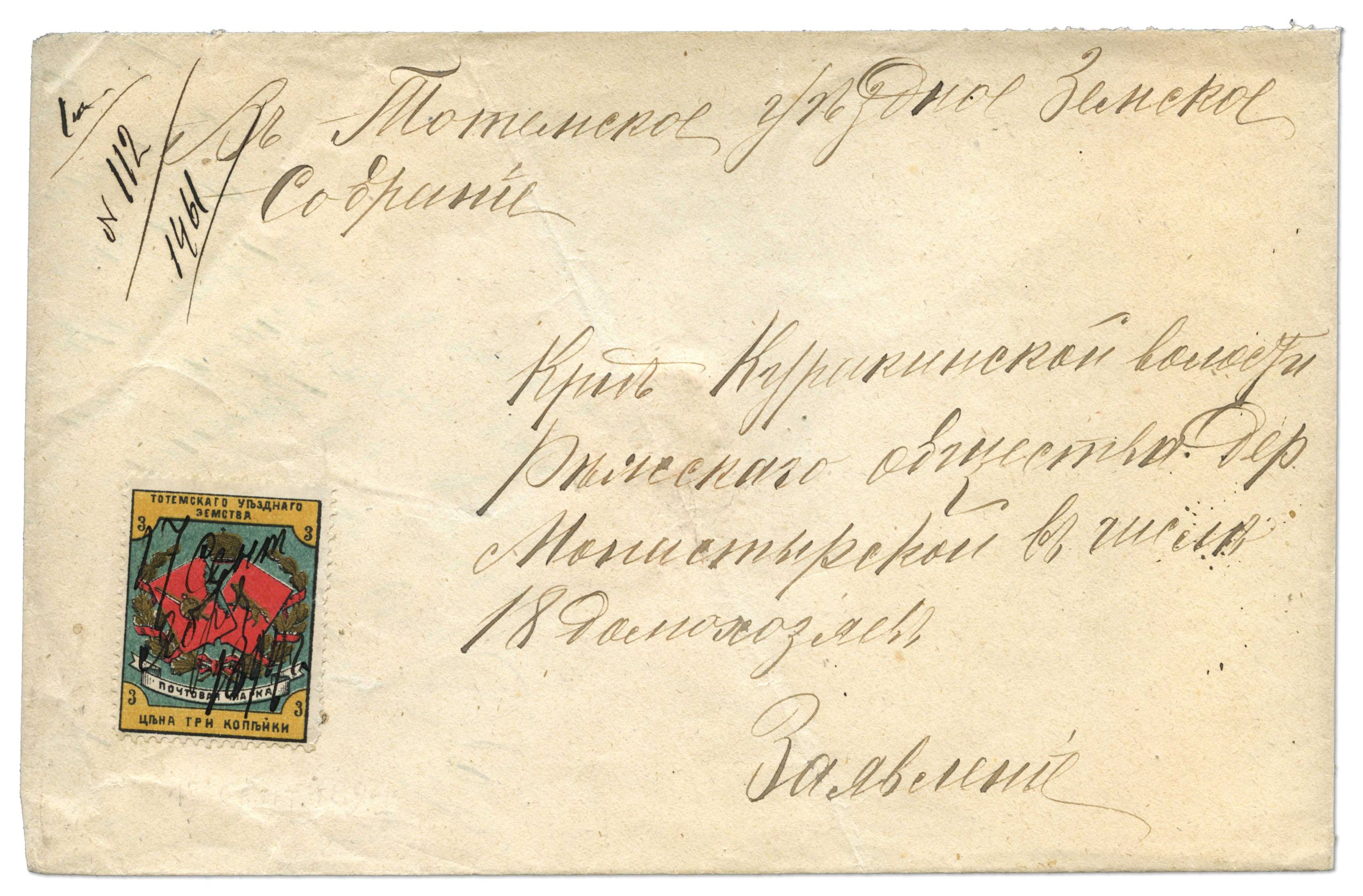 As well as an assortment of individual stamps and covers there are amongst the 336 lots (30400 to 30736) of Zemstvo material a number of collections and small studies. One of the most significant of theses is lot number 30723, which is an exceptional study set out on 83 written up pages covering the Zenkov (Ukraine – Poltava region) 1879 to 1895 and includes many multiples, mint blocks, fine used material and rare covers, some ex Ferrary and Fabergé, and a study that reflects over 40 years of assembling. A rare opportunity to purchase such a detailed level of research on such a scale. There are also smaller collections on offer including an interesting Bear themed group, lot 30701, which is a study of 54 stamps, mint and used, from Ustsysolsk, featuring the attractive Bear and Coat of Arms type Zemstvo stamps. 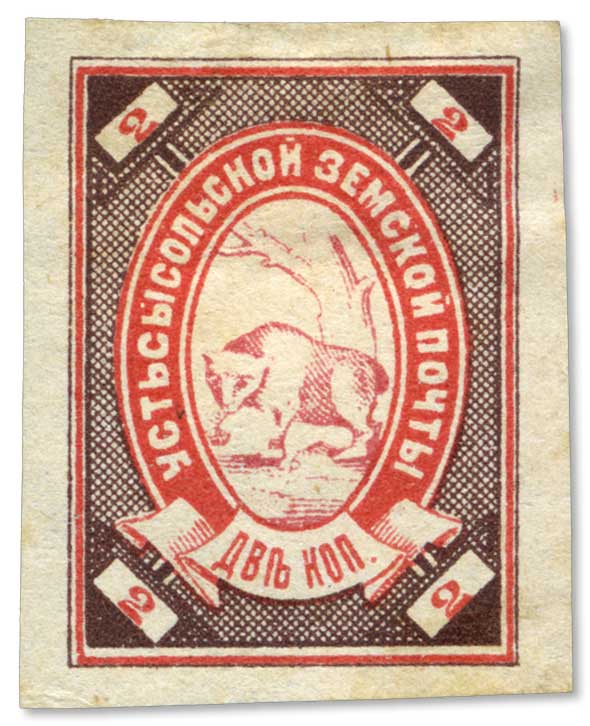 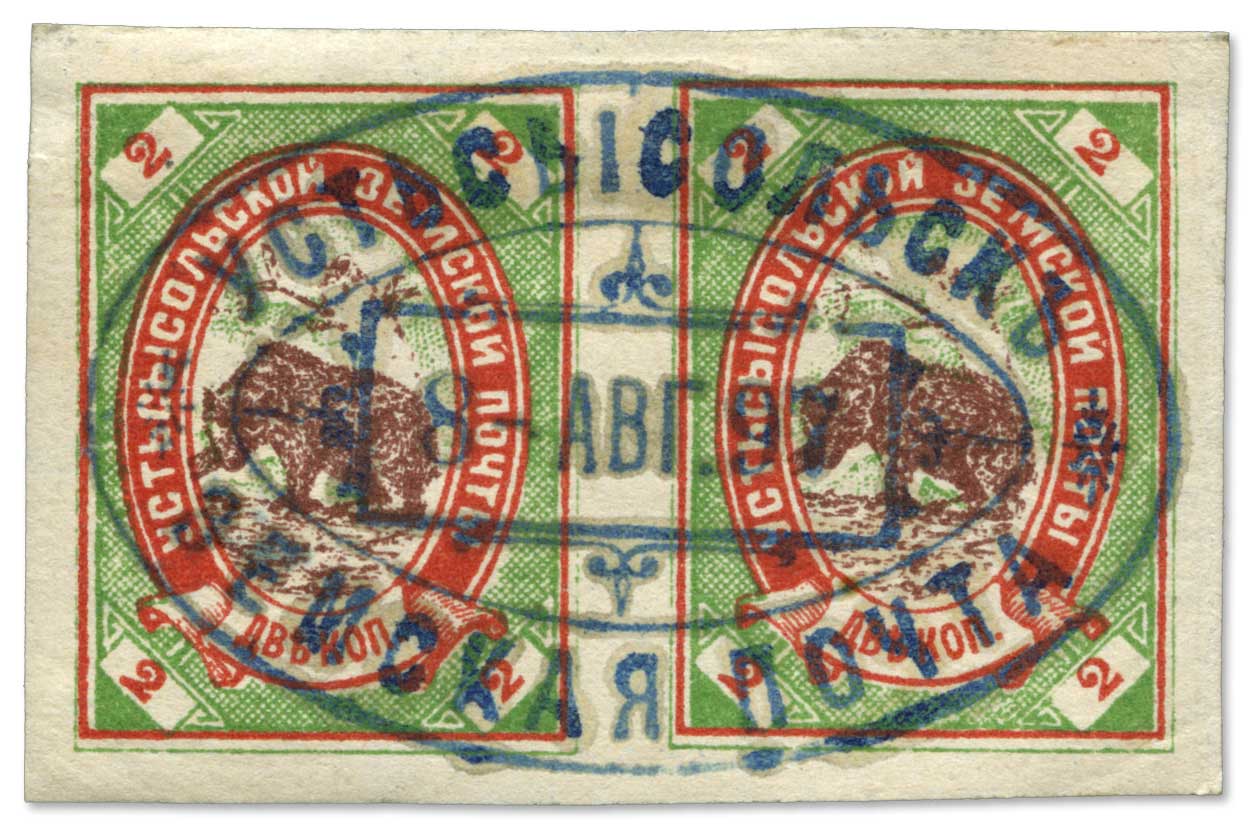 It’s worth noting here that the Fabergé’s pursuit and passion of the Zemstvo issues was a contributing factor in them being honored by the Russian Academy of Philately who created an award in their memory called, ‘The Fabergé Medal’, it is engraved in their image – father and son – and is given to collectors and figures in politics, science and culture who carry out public charitable activities in the promotion, strengthening and development of Russian philately.

Certainly when you see the catalogue firsthand you will be treated to an array of varied material that it is easy to see what caught the imagination of these two great philatelists. This selection of Zemstvos stamps and covers illustrates that the topic of Russian local, or rural post, is not only fascinating, but provides a unique perspective into the contrasting Imperial Post during the 1865 to 1917 period in the history of Russia.