The Faces of the Romanov Empire

Unlike the world news we in the philatelic realm can swerve the international cyberattack squabble and get our faces into something far more tangible regarding Russia this month and that’s the news we have The “Nikolai” Collection of Romanov Essays and Proofs to marvel at. So without any further sanctions let’s have a closer look at this historic family. Firstly, the Russian Romanov dynasty lasted more than 300 years between 1613 and 1917 and included a total of seventeen rulers, albeit you could argue there were nineteen, because Michael I (1596 – 1645), although being the earliest official Russian Romanov Tsar the reality is that his father, Feodor (1553 – 1633), was the de facto ruler of Russia, and then there is the joint rule of Peter the Great (1672 –  1725) with Ivan V (1666 – 1696), who were brothers from different mothers and the fourth Tsars of Russia but occupying just the one spot in the hierarchy.  If the beginning of this remarkable Romanov tercentenary dynasty was marked with that double line of son and father, it certainly ended with a definite dark single line marked across history. We all know the unsavory story about Nicholas II (1868 – 1918) and his family being brutally executed by the Bolsheviks in 1918 during the Russian revolution. It is hard not to reflect on this sad episode when admiring the faces of the Romanov essays and proofs which feature in our broader upcoming auction of Russia and Soviet Union. 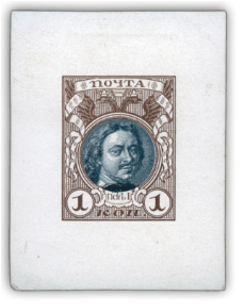 The various profiles of Nicholas II are particularly moving and thought provoking especially when you read about the manner of his murder, which sadly included his wife and children. Much of the details surrounding precisely what happened are still unknown, and indeed their remains weren’t discovered until more recent times when an amataeur archologist discovered their bodies in a mineshaft in Sverdlovsk (Yekaterinburg) during 1989. The other striking aspect of these beautiful essays of Nicholas II is how similar they are to those of Great Britain’s King George V, which is not surprising I guess given they were first cousins, but you could be forgiven for thinking these two monarchs were twins, and as every stamp collector knows they both shared a passion for stamp collecting, and by the looks of the many engravings portraying their royal faces, they equally had a love for a decent beard. 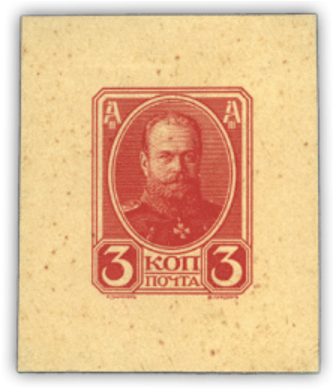 And Alexander III (1845 – 1894), the penultimate Romanov Tsar, was no lightweight in the hairy face department either, and if you do your homework on this man-mountain he was a formidable individual who stood at over 6 feet 3 inches tall and possessed almost superhuman strength, and yet he is known as ‘the peacemaker’ because his reign was marked by no major wars. However, looking closely at the proofs from the 1913 Tercentenary issues he has a forbidding presence, especially in the stare. It wouldn’t be a surprise if the real reason other nations avoided conflict with Russia during his reign was down to their fear of the man himself. Indeed there is a wonderful anecdotal story concerning an Austrian ambassador who threatened to mobilise his army against Russia, and in response Alexander III twisted a silver fork into a knot and threw it onto the plate in front of the guy and told him, “That is what I am going to do to your two or three army corps.” Needless to say there was no trouble after that. 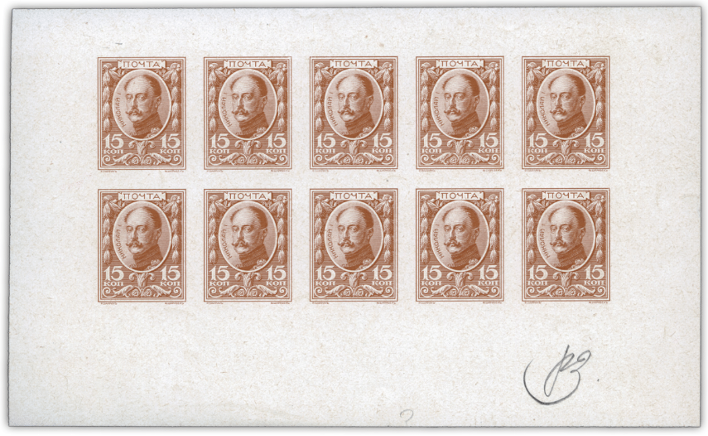 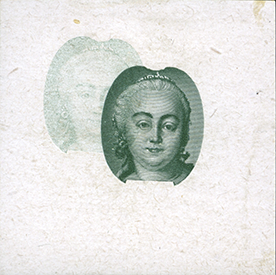 Lot 30083  1913 Romanov Tercentenary of Elizabeth I 50k vignette only die proof in green with a double print.

One of the most fascinating periods of the more recent Romanov era is of course Alexander II (1818 – – 1881) who’s moustache set the standard for the next two generations, but his reign as well as being known as the Emperor of Reform because of the emancipation of Russia’s serfs in 1861, which earned him the title Alexander the Liberator, his emperorship was one which was literally littered with assination attempts. I realise the saying ‘if at first you don’t succeed…’  is in fact attributed to Robert the Bruce, king of Scotland, but clearly the revolutionaries in Russia during the 1860 to 1880s, must have been familiar with the expression. There were no less than five failed assination attempts on Alexander II life before the sixth attempt proved fatal, as well as being successful it was a comprehensive attempt in that there were three assassins carrying explosives, the first killing a number of his Cossack guards, and then the second being lethal. The third not being needed and he was apparently only standing by if the other two bombers were not prosperous. Poor old Alexander II really stood no chance. If assassinations and giganuan facial furniture aren’t your thing then don’t despair because there are some tasteful portraits engraved on these essays including Nicholas I, whose face is modestly dressed with a touch of hair, and similarly Alexander I, who only has an understated upper lip. But if you want to dispense with the tash completely there is Paul I (1754 – 1801), Catherine I (1729 – 1796), Peter III (1728 – 1762), and Elizabeth (1709 – 1761) who’s bare faces smack some what of babies, albeit in terms of history the Romanovs Ivan VI, (1740 – 1764) takes the baby biscuit because he took the throne at only two months old. It didn’t last because his first cousin, Elizabeth (mentioned above and inset), in a rather two-faced manner, seized the throne in a coup. The young faced Ivan and his parents spent the rest of their days in captivity. It’s a harsh world ruling an empire but at least they were spared the cyberbullying of today. Suffice to say that, ‘The House of Romanov’ is beautifully depicted in these essays and proofs which were produced for the 1913 celebrations, giving us a glimpse of the very contours of their reign, which are artfully portrayed and almost projected through their various profiles and Imperial, often bearded, but also hairless, faces.

These stamps will be offered in our upcoming auction on June 15th. The lots will be online by mid May.