If there was such a phrase as a ‘philatelist’s philatelist’ then you’d expect the qualities the said stamp person would possess would be those that made them revered by other philatelists rather than with coin collectors. And throughout philatelic history there have been a number of these characters who have left a more than sufficient impression of their credentials in this regard and who have commanded a suitable amount of respect, holding such a reputation that they would qualify for this accolade. Names that spring to mind are Avery, Legrand, Duveen, Denny Bacon, Pack, Lichtenstein, Caspary and of course Maurice Burrus. The latter who has been described also as an affable, likeable and a lovely guy, who apparently didn’t suffer philatelic philistines very gladly. We can live with that, and if you do your stamp collecting homework, Maurice Burrus (1882 to 1959), was an elite philatelist, considered to be one of the greatest ever stamp collectors of all time and who amassed one of the most comprehensive collections in scale and rarities seen in the last century. He knew his stamp and postal history stuff and as well as having the financial clout to buy anything he wanted, he had the knowledge and experience and that precious trait of being able to refrain from buying a stamp if it didn’t meet his critical eye, even if he had a space for it in his collection. In a nutshell, you could trust Burrus with your own money and send him off to evaluate and buy a world rarity and be sure it was right, and if he didn’t buy the rarity then there was a good reason why not. He was without doubt the ultimate philatelist’s philatelist. The featured unique 1851 Cotton-reel “2 cents” error on cover was once held in his collection and it remained there for over 30 years, only his passing breaking the bond. Let’s find out why….

The cover in question is one of the lots available in the upcoming auction of the “Imperium” Collection of British Guiana on 14th October 2021 and is a cover that Burrus prized, it holding a special place in his British Guiana study, which during the 1964 sales of his collections, was described as, as important as the famous 1856 ‘One-Cent’, in as much as both are believed to be unique. So what exactly is it? Well, as noted above, it is a British Guiana 1851 “2 cent” pale blue Cotton-reel which is either – depending upon which of the four expert authorities you wish to believe – an error of ‘denomination’ or an error of ‘colour’. 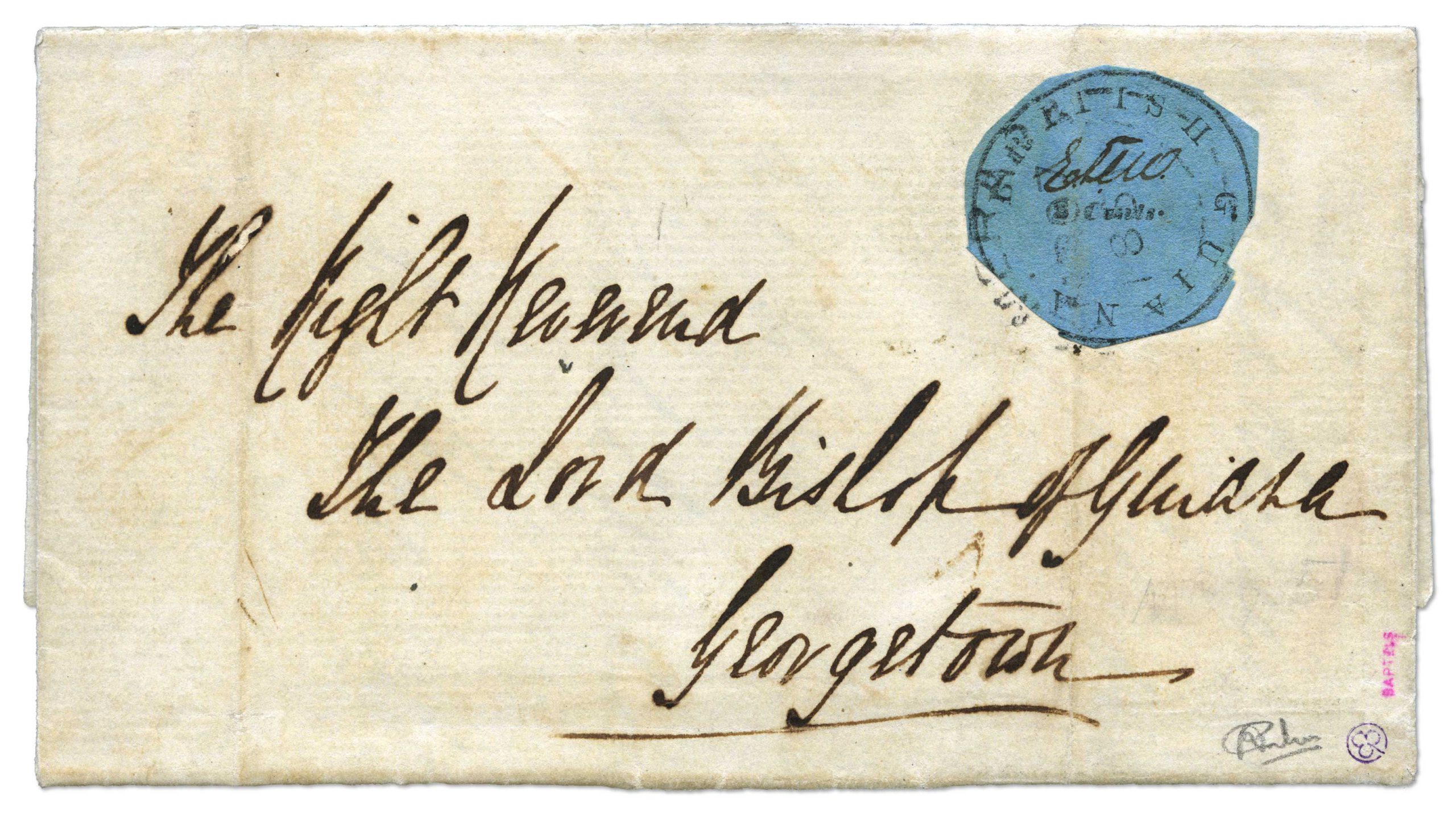 Such semantics we philatelists, and especially our philatelist’s philatelist, will have to leave to the experts because there is no question over its genuine status, they all confirm that it is without question a world rarity, but they can’t agree which ‘one’ of a kind it is. The fact there is only one, what ever the branch of linguistics or logic applied, goes some why to explaining why Burrus purchased it at the Ferrary sales in 1927, ahead of other bidders and buyers such as Hind, Caspary and King George V, all who were prominent spenders at those sales. After the Burrus auctions its exact whereabouts is not fully known, although it did appear in a 1986 Wolfgang Jakubek Hamburg auction, taking pride of place on the front cover of the catalogue, described as an incredible rarity and an error of value rather than colour. Then again in 2014 David Feldman SA sold the cover via Private Treaty, featuring within, but not part of, the John E. du Pont British Guiana Grand Prix winning collection, where all lots were sold resulting in over EUR 6m in sales.

So, if the British Guiana Cotton-reels had a phrase that went; ‘the cotton-reel’s cotton-reel’ then this 1851 “2 cents” pale blue error on cover would most definitely be the most revered of all Cotton-reels, and could go shoulder to shoulder with the Provisional’s Provisional. You might say that the British Guiana ‘stamp’s stamp’ is held jointly by our cover here and that other famous octagonal adhesive that was produced some five years after our famous Cotton-reel. However, only one of them was owned by the ultimate philatelist’s philatelist.