The news we bring this month is a tantalising triple tremor of exciting headlines – the first of which is the gratifying announcement that the European Philatelic Exhibition, NOTOS 2021, is going ahead in Athens, Greece, from the 19th to 22nd November 2021. The second newsflash is that we are sending our very own attaché, Marcus Orsi, to present the Museum of Philately on behalf of David Feldman SA, which leads us to our triumvirate bulletin that Marcus is taking part in an exhibition of the mythical Greek stamps known as ‘The Solferinos’. 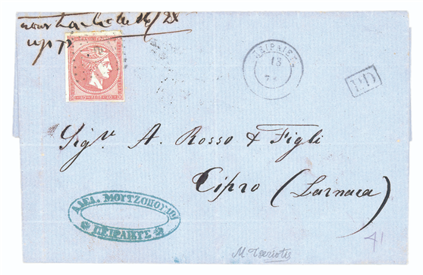 This iconic and rare set of stamps is celebrating its 150th anniversary and one of the events you will be able to enjoy is a rather earth rumbling exhibit titled; “The Great Encounter of the Solferinos”, bringing together, for the first time, eleven of the thirteen recorded copies of this coveted adhesive which are being put on show by six exhibitors. One of items on show will be the Greek God of a cover which is the only example of a Solferino on an entire, and holds the title of being the highest price ever achieved for a Greek item. This world rarity has kindly been loaned to David Feldman SA, by the current owner, to enable Marcus Orsi, to display it at NOTOS 2021.

This prestigious coming together of  the Greek 1871 40 lepta lilac-rose colour variety, which is printed in the shade of the control figures used on the reverse of the stamps, is being organised by the The Hellenic Philatelic Society within the Court of Honour, where there will be four other gigantuan Greek exhibits to gape at. The venue of all this philatelic awesomeness is poetically at The Zappeion one of the most celebrated Conference and Exhibition Halls set in the heart of Athens, built in the 1880s – which is ancient, admittedly, but not as old as some of the stamps it will be hosting. And as a little bonus bit of news for all those that make the trip to Athens; Marcus Orsi is also putting on show another legendary cover – again by kind permission of the owner – the famous and unique 30th September cover franked with a selection of the 1861 Large Hermes Head Paris Printing, which sold in a David Feldman SA auction in December 2020, and which is considered to be one of the most important items of Greek philately.

So, it promises to be an event of mythical proportions which we hope you will attend and take the time to meet Marcus and take a peek at the philatelic treasures on display. 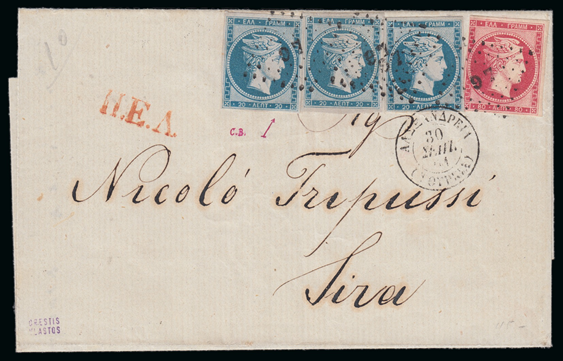 The Famous and Unique 30th September 1861 Cover which sold in December 2020 for €115’900, at a David Feldman SA auction. One of the most important items of all Greek philately and a world rarity rivalling the other famous usages of first issues used prior to the official date of issues, being that of Austria and Great Britain just to name a few.