Below is an extract from the “Encyclopaedia of Rare and Famous Stamps” by L. N. Williams, vol.1, p.289-291, about the Uganda Missionary stamps produced by Reverend Millar on his typewriter. The examples illustrated below will feature in our upcoming June 13th-17th auction series as part of the “Overstrand” collection of East Africa which includes Uganda.

There is something about a primitive-looking stamp which makes it particularly attractive to the philatelist. A stamp produced under difficult conditions and bearing on its face evidence of those conditions has a charm which is all its own. The first issues of Uganda are extremely primitive because no printing press was available when they were required.

When the Kingdom of Buganda was proclaimed the British Protectorate of Uganda, in 1894, the mail service between Kampala and Great Britain was poor; letters took about three months in transit. The internal postal system in Uganda was irregular, to put it mildly. George Wilson, a government official who later became Deputy Commissioner, conceived the idea of a local post. He consulted the Rev. Ernest Millar, who worked for the Church Missionary Society at Mengo, about stamps for use on letters carried by the service. The task of preparing them was entrusted to the Rev. Millar who typed them with a black ribbon on the only typewriter in the country. He used thin, brittle, laid batonne paper, normally used for his sermons. An entry in his diary for 14 March 1895 is recorded in an article titled “The Postage Stamps of Uganda” by Charles J. Phillips in Stanley Gibbons’ Monthly Journal, vol 14, p.166, February 1904:

“At lunch-time Wilson looked in and wanted us to help him with his idea of a postage system in Uganda. I consented to print some stamps for him and printed him off a sheet of all values, from 10 to 50 shells.”

In Uganda 200 cowries or ‘shells’ were equal to one rupee, about one shilling and one halfpenny. Money cowrie (cypraea moneta), is a small shell-fish found in the Indian Ocean; the shells were used extensively for money by the peoples of Eastern Africa.

On 16 March 1895 a notice was published in Luganda containing details of times at which letters would be collected and dispatched, and particulars of the postal rates which varied from 10 to 60 cowries according to distance. The last paragraph of the notice read:

“Only one letter may be enclosed in each envelope. If more than one letter be put in an envelope, the whole
will be confiscated. Letters insufficiently stamped will not be posted.”

The sheets of stamps were not gummed; examples were affixed to letters with gum straight from the plant.

The design was simplicity itself, consisting of merely the letters “U G” at the top, and the figures of value in the centre. The horizontal frame-lines were made by the hyphen stroke of the typewriter and the vertical frames by the apostrophe.

The first printing was in sheets of 117 stamps, in 13 rows of 9. The sheets contained a row of each value, but there was more than one row of the 20 and 25 cowries, which were most needed. No full sheet was known still to be in existence when the details came to be recorded, but the denominations have been stated to be 5, 10, 15, 20, 25, 30, 40, 50 and 60 cowries. Each stamp was between 20 and 26 millimetres wide. The stamps were imperforate although the frame-lines tended to act as a coloured roulette. 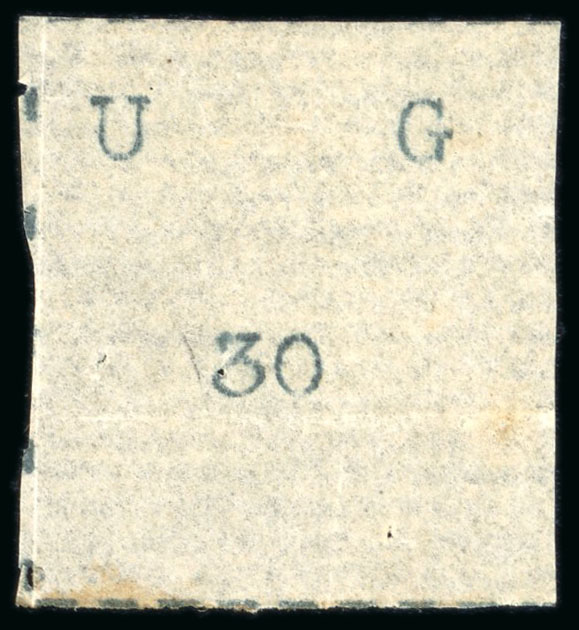 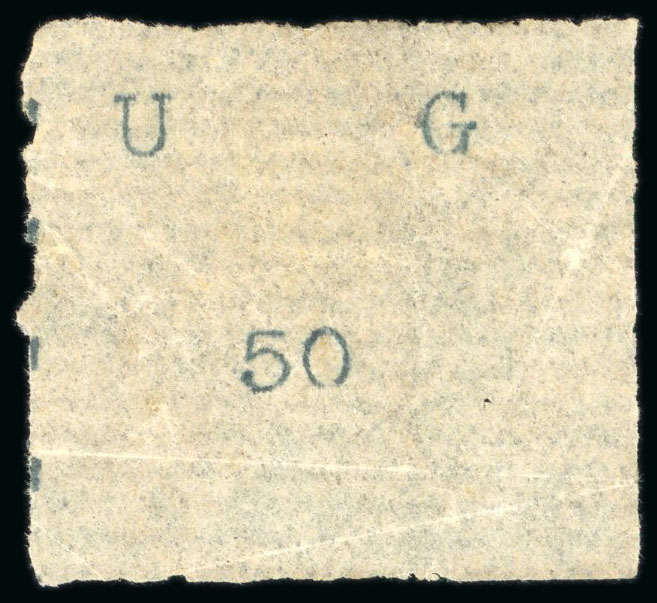 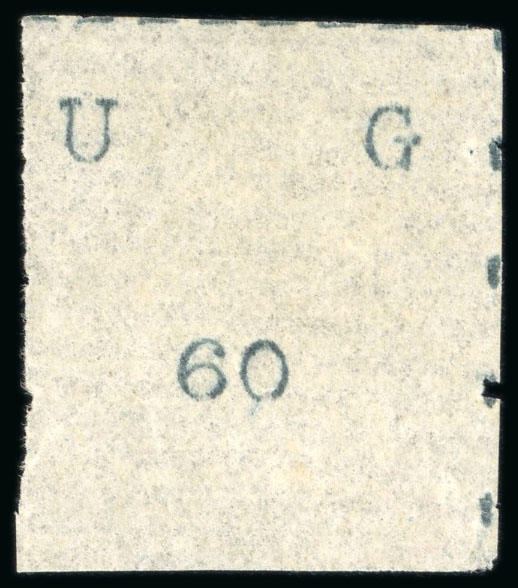 Several typing errors occurred. Stamps are known bearing the letters “U A” instead of “U G”, “0” typed on top of “4” on the 40 cowries, “0” typed on top of “1” on the 50 cowries ; and other mistakes of a similar nature. No postmarks were available until 1898 ; and the typewritten stamps were cancelled by writing across them in pencil or ink. The cancellations usually took the form of a cross.

According to some authorities several values ran short during May 1895, and provisionals were made by manuscript surcharge in black ink. In “The Uganda Missionaries” by Robson Lowe London 1974 p.5 appears an illustration of a cover inscribed “1 box sent by canoe, Rev. W.A. Crabtree, Luba’s, Busoga” which bears at the top right a horizontal strip of three 10 cowries stamps of the first printing, the right-hand stamp with the value struck through and initialled “E M” and “5” in manuscript above the original value; each stamp is cancelled with a diagonal penmark. Mr Lowe asked whether the 25 cowries postage comprised by those three stamps was something to do with the parcel rate. His opinion is that other manuscript provisionals came earlier than May 1895 and their use, which was to be accounted for by a new set of rates introduced in April, preceded normal stamps so denominated in another ‘printing’. The implication is that stamps of the denominations of 5, 15 and 25 did not appear in sheets of the first printing.

The provisionals are known in the following denominations : 10 on 50, 15 on 10, 20, 40 and 50, 25 on 50 and 50 on 60. Some of these provisionals have been found bearing the initials G R B, but the identity of the person concerned has never been satisfactorily established. It has been suggested that the initials were those of Canon G.R. Blackledge, or alternatively of Archdeacon G.K. Baskerville.

In April 1895 another printing was made by the Rev. Millar. Stamps of the second and subsequent printings can be recognised by the fact that they are narrower than those of the first printing, being only about 16 to 18 millimeters wide. Sheets of the second printing contained 143 stamps, in 13 rows of 11. The denominations were the same as those of the previous issue. Varieties due to typing errors occur also in this issue.

About the end of April 1895 the Rev. Millar received a new typewriter from England, and on 6 May he sold his old machine to the Church Missionary Society. The denominations of the stamps produced during May and the following months remained unchanged but show slight differences from the earlier issues owing to the type on the machine being not quite the same as that of the old one (see fig. 2). 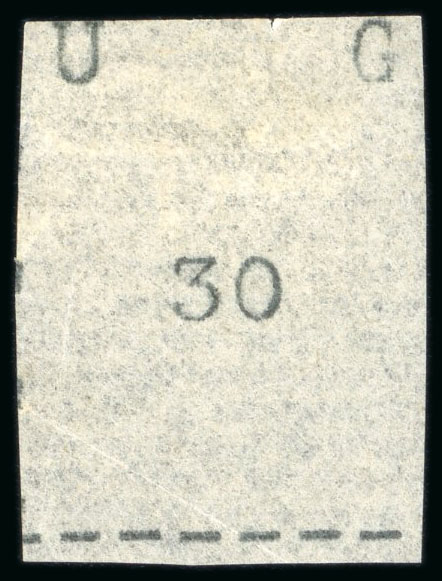 Towards the end of 1895 the Rev. Millar changed the ribbon of his typewriter, and all stamps produced subsequently were in violet (see fig. 3). A printing was made near the end of the year; the denominations between 5 and 50 cowries remained unchanged but the 60 cowries value was dispensed with and a 100 cowries stamp substituted. Typewriting errors can be found on several of these violet stamps. 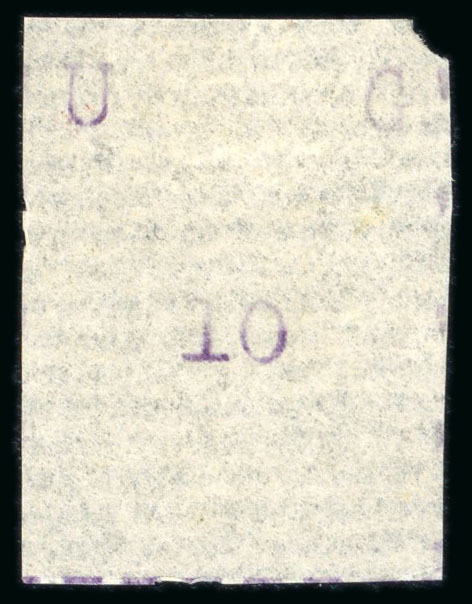 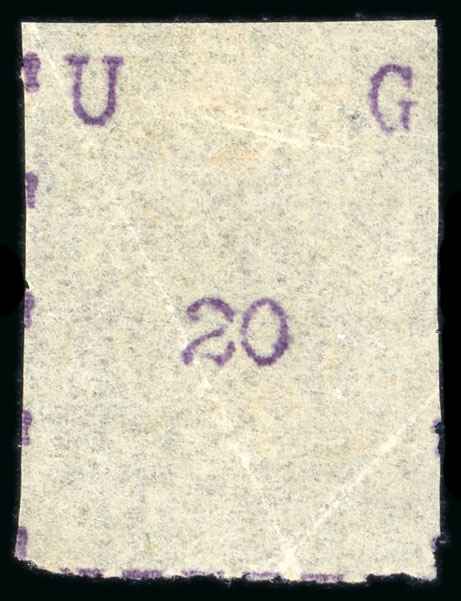 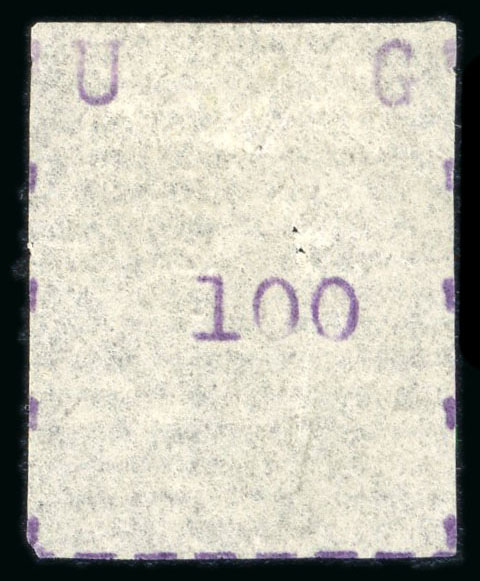 Stamps of 35 and 40 cowries in black and violet have been found as well. Neither of those values was ever used for postal purposes, nor did the denominations represent a postal rate. The stamps were prepared by the Rev. Millar so as to oblige a friend, Dr. Ansorge, who was a philatelist. It is stated in “The Encyclopaedia of British Empire Postage Stamps” vol. Africa
p.187 that six of each of the 35 and 40 cowries values were made. Those stamps were produced on the same machine and on the same paper as the stamps which were actually issued.

In June 1896 another issue was made in a different design (see fig. 4). The inscription at the top was “V.96.R.”, the figure of value appeared in the centre, and “Uganda” at the foot. The sheet formation was unchanged, and the denominations were the same as those of the previous set, with the addition of 60 cowries. 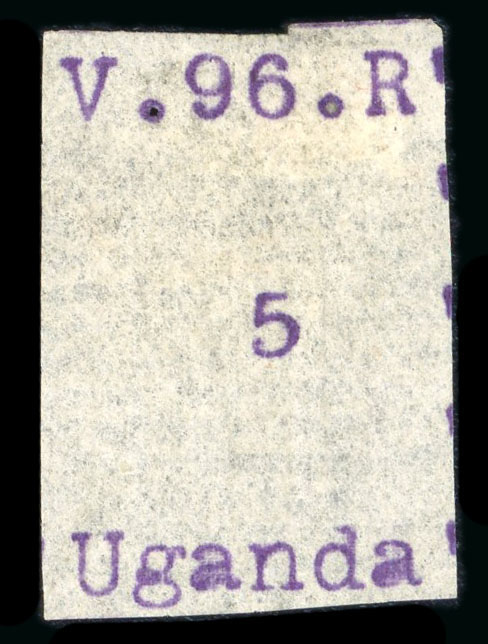 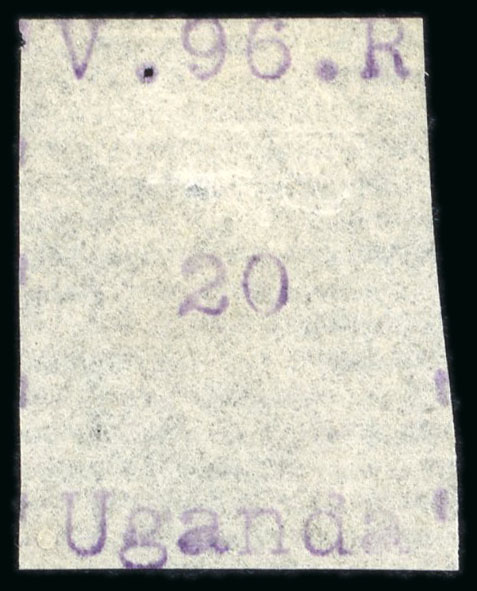 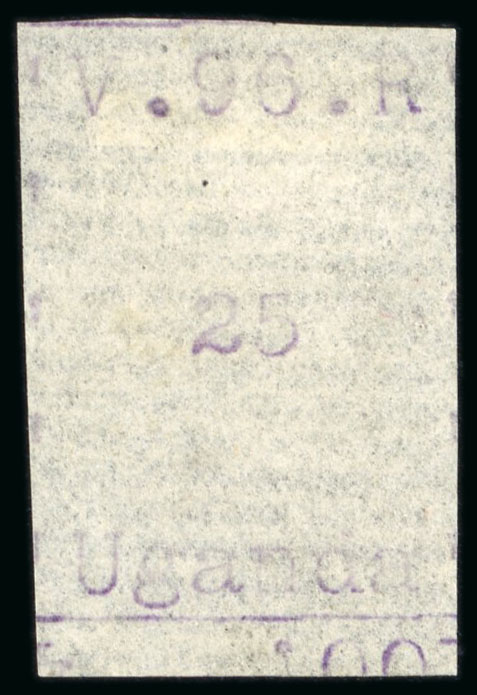 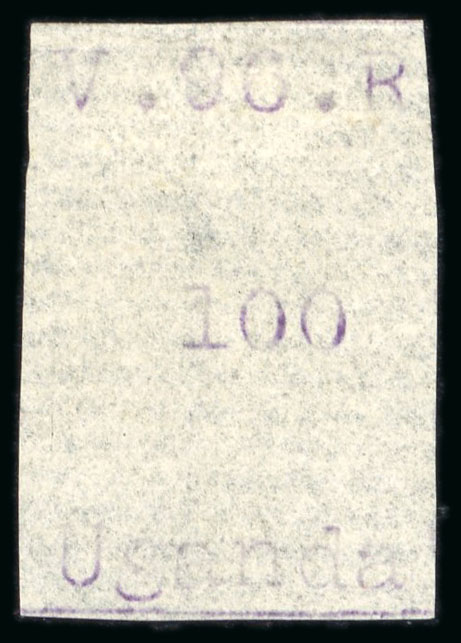 The last row in sheets of this issue was also tête-bêche, but in some instances the details of the values contained in the sheets were omitted. There are numerous errors in this issue.

The typewritten stamps of Uganda, especially those of the first issue, are extremely rare on entire letters, and used examples, even off letter, are not often found. With the appearance of printed stamps in November 1896 (see fig. 5) the typewritten issues went out of use. 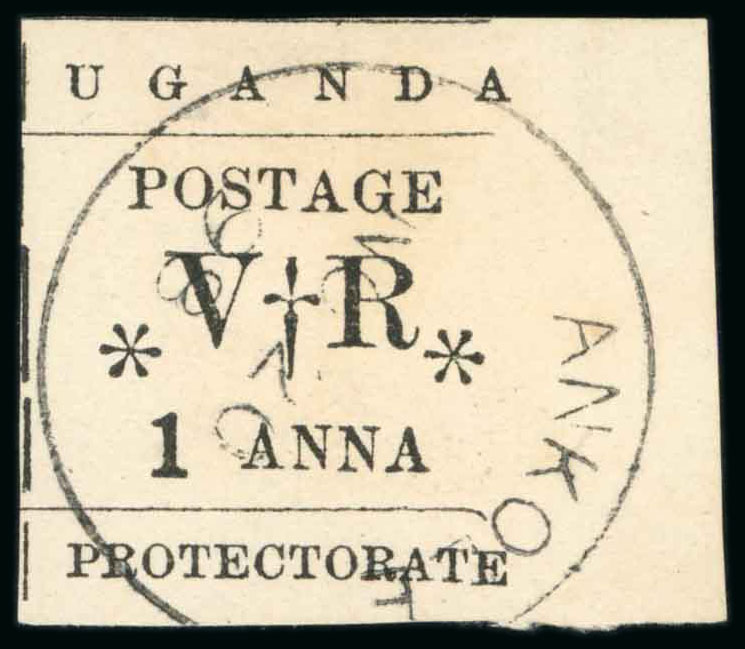 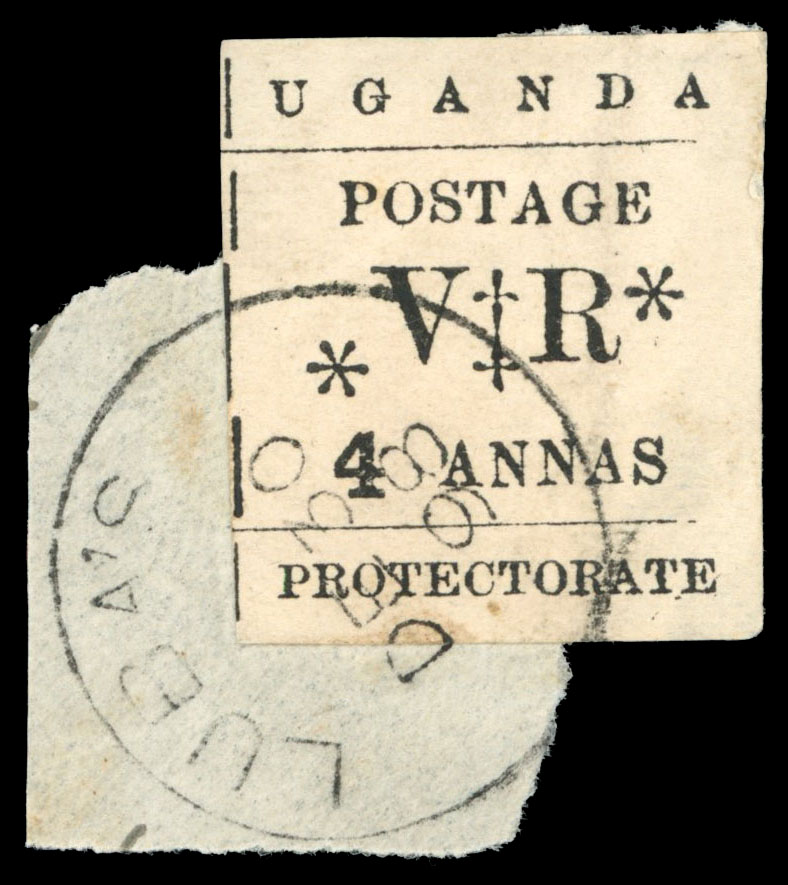 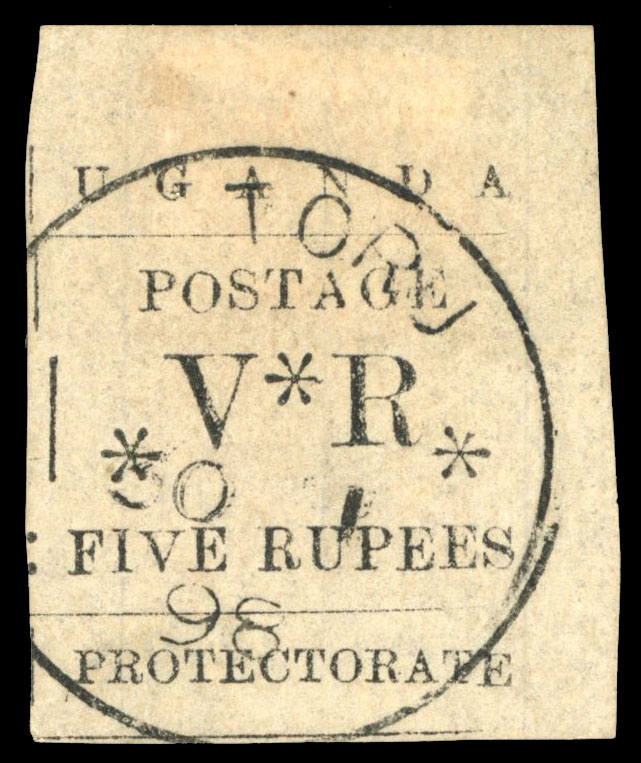 Fig. 5: 1896 (Nov) type-set issue by Rev. Rowling, the 1a cancelled by Ankole cds, the 4a cancelled by Luba’s cds and the 5R cancelled by Toru cds, intervening typing at foot, which will all feature in our June 17th 2022 GB & British Empire auction.

Production of the GB & British Empire catalogue has just begun, and anyone who would like to receive a copy of the catalogue featuring the “Overstrand” collection of East Africa should contact us, and be sure to keep an eye out for our usual viewing in London.